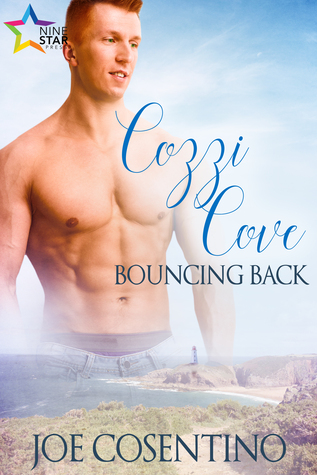 On Cozzi Cove at the New Jersey shore, handsome Cal Cozzi’s seven bungalows are open for summer and love.
Mario and Harold are brothers and college students who happen to look alike, but couldn’t be more different: Mario is searching for love, and Harold is searching for lust. Josh and Greg, a wealthy older couple, are matchmakers for their son, Christopher.
When it comes to Connor, the maid, packed with muscles and a roving sponge, anything can happen. Opposites attract as wild Tim with the secret past meets shy Mark, and porn star Chuck Caliber connects with Sean, a virgin romance novelist.
And what will happen when computer-game designer Arthur has a midnight sea rendezvous with a merman? Even married Cal faces an emotional upheaval when a gay bashing turns into something quite unexpected.
What secrets and passions lie in magical Cozzi Cove?

Cozzi Cove: Bouncing Back, by Joe Cosentino entices the reader into a myriad of stories woven around seven holiday bungalows, owned by Cal Cozzi. This book tells the stories of the guests staying at the resort for the week. Cozzi Cove turns out to be the best gay friendly place to spend a quiet week!

There’s a lot going on in this book, both characters and action, and at times it can be hard to keep up with where each story is, but trust me it’s well worth it. This book is extremely well written and all the stories are equally compelling and cleverly crafted. There are moments when, just as you think you know what’s going on, the truth emerges and turns out to be something quite different. Each resident, including Cal and his friends, has their story told and new relationships are forged from old fears and past troubles.
Cal’s guests are an amusing and heart wrenching mixed bag of people, all of whom I found irresistible in their own way. They include a discouraged porn star who falls for a virgin author, twenty years his senior, and who suffers from OCD. That particular partnership leads to a hilarious gym scene!
There are the identical twins who have issues with each other, particularly when twin Mario meets Chris who’s holidaying with his gay dads. There is the heartbreaking story of a dying man, Mark, who finds comfort with Tim, who himself has a tragic past he can’t let go of. Then there is Arthur who has a condition which means he can only go out at night. In the darkness of the cove, he meets a ‘merman’ who is not all he seems and who shares a similar affliction among other things.
Even the ‘maid’ Connor has his story as he tries to bed anyone who’ll have him, in particular Mario’s twin, Harold. Cal himself is struggling to let go of the memory of his late husband, Lance, despite the obvious affection of local barkeeper and old school friend Tommy. As his story unfolds Cal helps a young man, Michael, to get back on his feet. Michael’s brother has just committed suicide because he thinks being gay is wrong and Cal finds out Michael is also struggling to come to terms with his sexuality.
We are also introduced briefly to Cal’s, often absent, sister who has a past with the local cafe owner Carla. So many wonderful, poignant and often funny stories are told here.

There is tragedy and emotion in this book, and at times I wanted to cry or shout, but there is also a whole lot of love and plenty of humor. It’s a real roller coaster of a ride that’s finished off perfectly as the guests spend their last day at Cozzi Cove then check out to move on with their lives.

To quote Cal, “Cozzi Cove has always been a place of love and rejuvenation…” I’m hoping that ethos is continued in book two Cozzi Cove: Moving Forward!

One thought on “Review: “Cozzi Cove: Bouncing Back” by Joe Cosentino”