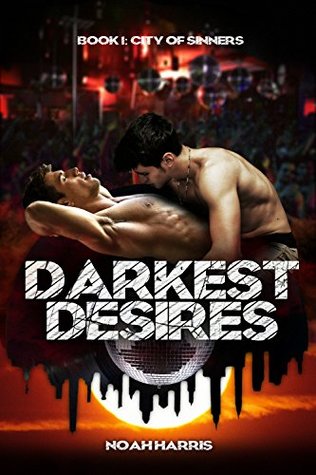 Disco. Gay liberation. The Son of Sam. Urban blight. It was a wild time in a wild city, and no one wanted to get wilder than a young man from a hick town in Missouri. Fresh out of high school, Richard Miller has come to the Big Apple to take a big bite of forbidden fruit.

But among the dark corners of the city’s cruising scene stalks an ancient evil. It is hungry for virgin male flesh, and it knows just how to tempt a young man eager for thrills and new experiences.
As Richard learns, this temptation threatens his new community, and even the city itself.

Darkest Desires is a dark romance with steamy scenes and bad language. It’s only recommended for readers 18+.

This book is not just maturely and cleverly written, it’s a unique vision of dark desire, twisted with snippets of, well researched, historical fact and erotic imagination. I warn you this book is not for the faint hearted! However, if you’re open minded and strong hearted enough it carries you, slowly at first, into another world. It’s like climbing the first incline of a roller coaster and then, when you reach the top, hold onto your hats as you’re plunged over the edge into a descent the likes of which you rarely get to experience in a book.
It’s 1977, Richard has just left high school and moved to New York City to get away from the small-mindedness of his hometown. He’s finally able to openly shout ‘I’m gay!’ Noah takes us on Richard’s tortured journey as he finds lodgings, is mugged and tentatively takes his first steps in a seemingly open, gay environment. He eventually makes good friends within the gay community and quickly finds out about the reality of life as a gay man in a big city. In the process, he also loses his virginity and learns so much more about his own desires and needs!

The 1977 Everard Bathhouse fire is part of his journey, and Noah offers his own fictional explanation as to the origins of the tragedy. Noah also gives the reader an eye opening, incredible sense of life as part of a minority often persecuted in the 70’s.
Although it actually starts out as a typical gay ‘coming of age’ tale it quickly becomes a much more mature, darker and more erotic, paranormal offering than even Noah’s usual stories. The plot includes, among other things, drug use, demons, the occult and rape, which some may find disturbing. However, they’re not gratuitous and add, deliciously, to the edgy feel of the book. There are so many incredible layers to this story it’s hard to put into words what I felt when reading it, which I did in one session as I couldn’t put it down. Time meant nothing as I was carried away on a tide of emotion, erotica and yes, horror!

The ending is well finished off, and the final chapters are a real high as Richard fights his demons, literally, realises his potential and comes into his own as a powerful, gay man. Noah also very cleverly leaves enough open for a second book! This is Noah’s mature, creative talent, clever intellect and twisted imagination working at it’s very best to create something much bigger than the sum of its parts. I believe I’m going to enjoy this series immensely and can’t wait for book two. Miss out on this book and you miss out on an awesome reading experience! But…as I said before, this is not for the faint hearted!