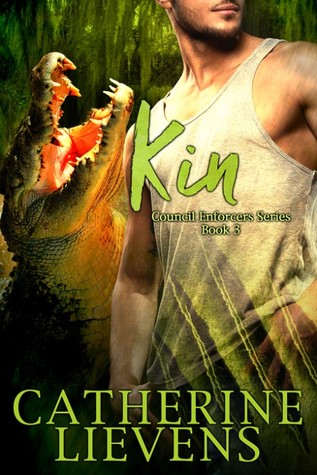 Sometimes you have to step out of your comfort zone to find happiness.

Kin always knew his job as an enforcer wouldn’t last forever. His mother is planning his marriage, to a woman she’ll choose to help advance their family name and fortune. The only way he has out of it is finding his mate, but there’s no quick or easy way to do that.
Saul has thought himself crazy for most of the past ten years. He sees half-transparent animal faces layered on some people’s human faces, and he voluntarily walked into a psychiatric hospital when he was twenty-three. Now he’s thirty-four, and he feels like he missed out on life. When his sister pushes him into leaving the hospital, he hesitates, but she won’t take no for an answer, no matter how much their parents pay Saul’s doctor to keep him there.
When Kin and his team are sent to make sure Saul gets out without any problems, Kin expects the mission to be routine. Instead, he knows Saul is his mate as soon as they meet. Will Saul finally manage to walk out of the hospital? And is Saul really crazy, or is there an explanation for what he can see?

Kin is a crocodile shifter that works as an enforcer for the Shifter Council. Kin loves what he
does and how he’s helped many other shifters. Kin lives with fellow teammates on the Gillham pack’s property. Kin’s mother has been trying to arrange his marriage to a woman to produce
grandchildren.
Even though Kin has been with both men and women, he knows he’s gay and
wants to find his mate. Finding his mate is his only hope out of a prearranged marriage. Saul is a human that believed he was going crazy and put himself in a mental hospital 10 years before. He sees animal faces mixed with human faces on some people. Well, while he was in that place, his sister has been begging him to get out, but Saul is too afraid. When a video is released, his sister gets the enforcers to get him out. Saul’s parents hate this and try to send him back.
Kin’s team is sent to get Saul out, and Kin knows immediately that he has found his mate. Saul is so confused when they leave the hospital and asks many questions. Kin answers them all but doesn’t tell him they are mates.
I really enjoyed Kin and Saul’s characters. I really would have loved more chemistry building between them. Kin knew right away that Saul was his mate but Saul didn’t understand the whole mate thing. And when Saul asked questions, he wasn’t answered but pushed to ask Kin. feel their struggle was very real especially since Saul had been in the mental hospital for 10 years. He was not sure how the real world was anymore.
I love Kameron and Zack also. I think they make great mates and have lots of knowledge to help all these different shifters. And the love they share is heartwarming. Penny, Saul’s sister, is amazing also. Would have loved to have read about Saul meeting his niece.
This is a fun read. I enjoyed it very much.

This is the third book of the second Spin-off from the Whitedell Pride series and running alongside the Gillham Pack Series. There are 25.5 in the Whitedell Series and so far 19 published in the Gillham Series with this being number 3 in the Council Enforcers Series.