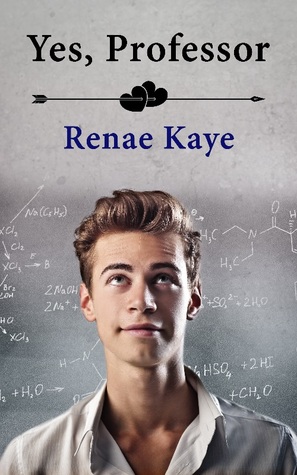 Twenty-two-year-old Avery Stewart has a crush on his neighbor. Always attracted to older men, Avery is tantalized by Mr Redding’s professorial looks and obvious obsession with perfection.

When he finally gets the courage to speak to Christopher Redding, Avery manages to get invited back that evening on the pretext of bringing a cake for Christopher’s birthday. But things don’t work out how Avery had planned, and he finds himself sent home with the cake and without any intimacy.

Christopher is everything Avery has ever desired—older, self-assured, dominant, and intelligent. Avery needs someone in his life to take charge—in and out of the bedroom. He wants Christopher to be that man. However, Avery must first convince Christopher to take a chance on him.

Damn, she did it again! I swear she does this on purpose just to annoy me! Of course, I couldn’t put her book down, again, till I finished it.

The last time I reviewed her book, “The Straight Boyfriend” I may or may not have said that Renae is a closeted man. Well, I may add to that by saying she is a closeted Dom too, or Sub…

So this book is the purest form of BDSM, the emotional part of it. Although the book has sexual content, I can’t call it erotica at all. Why? Because we are guided through Avery’s feelings, who seemed to be attracted to older more mature and dominant men. When he moves into his new house, with his best friend Nick, he suddenly feels obsessed with his new neighbor the Professor. The older man has his own schedule, that, by now, Avery knows by heart. He tends to spend so much time trimming his hedges into a perfect shape, like every day, and that action gives funny tingles to Avery’s different body parts. He can’t help it, the neatness and the puttogetherness of the older man makes him horny as hell.
Then, one day, he has enough with stalking and takes action. With the pretense of searching his mail, what he already collected like a few hours ago, he bends in all different positions, offering the goods, for a very low price. Don’t look at me like that, it was Avery’s words, not mine…judgy readers…huh!
His actions got him an, *cough self-invitation to the professor’s house. Chris, Christopher, oh man he knows what he wants!, has his birthday, and Avery decided that Christopher, not Chris, needs a birthday cake.
Well, that didn’t go as well as he hoped, and he promised himself that he will not give up on him.

I loved Avery, he’s funny, messy and very, very obedient. Avery is all gay men’s wet dream. And by all men, I meant those who like to be in control. Avery needs grounding, and the Professor can deliver it. But Christopher wants more, “more” Avery doesn’t know. He never did more, get in, get ordered around and get out. Being with Christopher though…this time he may want more…

When, last night, I forced Renae to admit that she is kind of a psychic, because she must have gotten in my head, stealing all my wet dreams, and put down in words, she denied it! Well, she didn’t convince me at all!
Dear Renea, I congratulate you again and again, and just so you know, you can crawl in my head anytime you like, and write the stories about my dreams!