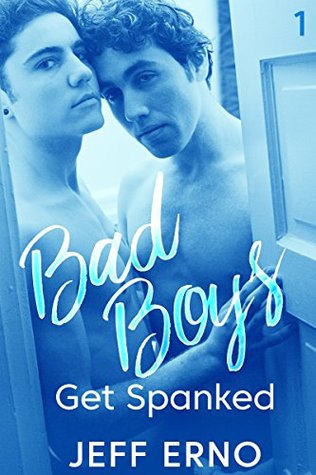 Boys will be boys… bad, bad boys who like to get spanked.

Kurt, a registered nurse, works a lot of hours. When he comes home after a long day, he expects his house to be neat and tidy, because the last thing he wants to worry about is housekeeping. His roommate, Greg, however, is a total slob. Kurt tries talking to his younger, less-responsible roomie, but Greg is ambivalent. When Greg throws a party and trashes the house the day before Kurt’s parents are due for a visit, Kurt considers throwing him out. Instead, he devises a better, more erotic punishment, one they both enjoy… and as a result, they have a spanking good time and the house remains tidy forever more.

Bad Boys Get Spanked is the first book in the Bad Boys Series by Jeff Enro. Bad Boys Get Spanked had potential to the storyline and characters. I liked the characters. Kurt agreed to take Greg as a boarder because he’s super cute and he has a beautiful smile. However, he should have known better than to have a boarder that’s so young. Even though Greg is great at getting the rent in on time and helping out with money for food and utilities, he’s a slob that spends all day playing video games and hates to clean up after himself and is forever leaving his nasty socks and underclothes all over the house. He tells Greg that he needs him to clean up the house because his parents are coming to visit the next day, and he won’t be there to help and supervise since he has to work a 12-hour shift at the hospital where he’s a nurse.

He’s counting on Greg to do what he has promised to do, which isn’t a lot since Kurt has already cleaned the living room and the kitchen. All Greg has to do is his bathroom and then keep the kitchen and living room clean. It sounds easy right. Nope, not for Greg. He decides to throw a party. Kurt comes home to find the house is trashed and that he now has to clean the house instead of getting three hours of sleep. He kicks Greg and his lover out of bed and makes them help him clean the house. After his visit with his parents is over Kurt comes up with a way to make sure that Greg never does this again and that Kurt never has a dirty house to come home to again.

I loved how Kurt punished Greg and how they came up with how many hits he would take from the paddle. I would have loved if the book had more sex scenes in it. There is a reference that Greg and his lover got each other off but it wasn’t detailed, just a one line sentence and then the book is ended with Greg on his knees awaiting to give Kurt a BJ. I really wanted to read that scene and thought that the book should have been ended after it.

Overall, I loved the spanking element of this book but it needed more sex, and it needed to be longer. The book was nicely written and edited.