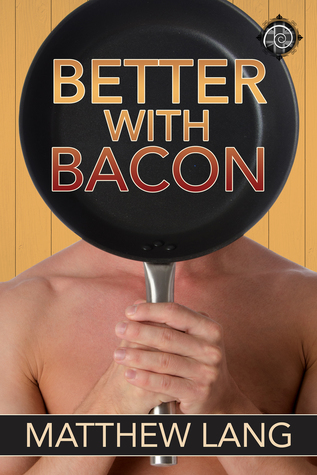 When Patrick’s long-term girlfriend Li Ling dumps him just as he’s working up the nerve to propose, he ends up drunk on David’s couch—and later in David’s bed. Although initially reluctant to pursue anything beyond a one-time drunken tryst, David throws caution to the wind during an intimate dinner, where the two men also discuss Patrick’s dream of entering the food industry. Just as the friends-turned-lovers are settling into their new romance, Li Ling calls Patrick—she’s pregnant.

Convinced the announcement spells the end of their love affair and a return to their platonic friendship, David flees to Sydney to escape his heartbreak. But upon his return to Melbourne, David discovers the situation hasn’t gone the way he’d expected. There might still be a chance for David and Patrick’s dreams to come true if they can forgive each other’s mistakes and move forward.

Better with Bacon by Matthew Lang is a cute novella about three childhood friends, David, Patrick, and Li Ling. Patrick and Li Ling had been high school sweethearts, and David had known them for half of his life. However, two weeks before Valentine’s Day, Li Ling dumps Patrick.
David is gay and has always been attracted to Patrick, but he’s always thought that Patrick was straight and he was in a relationship with his other friend Li Ling, so he never dwelled on the attraction that he’d had for Patrick. That is until Patrick and Li Ling broke up, and Patrick confessed that he wasn’t straight but bisexual and wants to explore his attraction to men and he wants David to be his first. David is thrown for a loop and isn’t sure what to do or how to respond. He doesn’t want to risk ruining their friendship, but at the same time, he’s being offered everything he’s always wanted. Patrick gets his way by saying it’s only going to be a one-night thing and that their friendship isn’t in any danger. But an early morning call from Patrick’s ex throws a big monkey wrench into the amazing night that the boys had.

David is called out of town for work for the weekend, but he’s pretty sure that Patrick and Li Ling will be getting back together. Heartbroken that all he wanted is slipping away, David drowns his sorrows in the arms of another man while he’s away. He’s surprised to find that Patrick is still single when he get back home and that Patrick wants to continue with what they had and start a relationship. David confesses about what happened while he was away and they put it behind them. The relationship that follows is sweet and passionate.

This book takes place in Australia and as such uses Australian phrases and has some weird sentence structure when the book first starts out. An example would be grade four camp versus fourth-grade camp and so on. But after the first couple of pages, I got used to it. The book was well written and nicely edited.