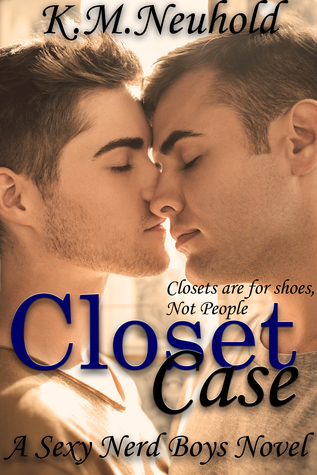 Jax
That awkward moment when you accidentally fool around with a closet case. I have a strict policy against dating closeted guys. Confused straight guys? Absolutely. Guys who don’t mind being out and proud? Duh. But closet cases are a hard pass. Been there, done that, have the t-shirt with a giant picture of a broken heart on it. It would be a lot easier to stick to my dating rule if Matthew Hart could be slightly less irresistible.

Matthew
Being a closeted gay college football player is not all it’s cracked up to be. After I broke my high school boyfriend’s heart by refusing to come out of the closet, I swore off serious dating. I don’t want to hurt anyone like that again, and I’ll admit I’m protecting my own heart in the process, too. It was a lot easier to stick to my no dating rule before I laid eyes on Jax Greene. He’s exactly my type in every possible way. If there’s even the slightest chance that history won’t repeat itself, I want to see where things might lead. Convincing Jax to give me a chance though might be the toughest play I’ve ever made.

**This book is the first M/M installment of the Sexy Nerd Boys series, but can be read as a stand-alone. Recommended for 18+ due to language and all kinds of hot sex

Closet Case is book four in the Sexy Nerd Boys series, by K.M. Neuhold. I have to own up to not having read the others, which turns out to be a serious missed opportunity on my part. This is Jax and Matthew’s story, and I immediately fell in love with both these college guys. First, there’s the openly gay bass player, Jax. He’s flamboyant and maybe a little camp, but he’s been seriously hurt before in a relationship with a guy who’s ‘in the closet’ and he really doesn’t want to go there again. Then there’s the hunky, closeted, football team quarterback, Matthew, who lost his first love because he couldn’t come out of the closet. Unfortunately, he’s still firmly in there! His excuse, apart from a homophobic father, is he’s trying for the NFL and, after all, macho sportsmen aren’t allowed to be gay. Right? He also worries about how his teammates will react, in particular, one very vocal homophobe who takes every opportunity to verbally tease Jax.

The two of them are thrown together by their professor who teams them up on a term project which naturally puts them in close proximity. They also have a group of mutual friends who already know Matthew is gay. Both fight the growing attraction but give in, grudgingly, to feelings that scare them but that they can’t ignore. Both have to compromise their principles to be together, and they both know the ending to their story won’t be pretty, but neither can make the move to end it just yet!

I adored Jax’s conviction that he would not ‘out’ anyone, even his ex, without their agreement. So much temptation is put in his way, and he clearly loves Matthew but is constantly being hurt by not being able to be open about their relationship to anyone, including his best friend. I could feel the struggle between Matthews heart, that desperately wants to be open with Jax, and his head that truly believes that he can’t have that and pursue his chosen career. I so badly wanted him to fling caution to the wind and declare his love to the world. Does he do that? That would be telling. I will say there’s a HEA and the final chapter takes place eight years later which is a nice touch.

I thoroughly enjoyed reading this book. The plot is predictable, but that just means you don’t have to think too hard while reading it, making it a great ‘curl up for an afternoon’ book. It’s also quite well written, and the characters are strong, loveable and believable. Overall this is a great, solid ‘closet’ romance.