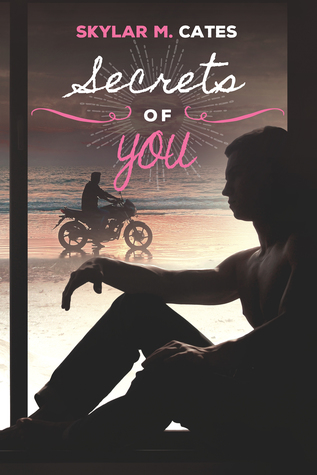 Carrying scars and regrets, River Darcourt avoids too much intimate contact. Among his friends, he is known as a quiet loner. Forget about love. It’s not something he will consider… until sweet, young, and tempting Morgan Hayes becomes his housemate. River closed his heart long ago, but the attraction is impossible to deny.

Morgan Hayes needs a change. He is moving out of his critical father’s home and in with his friends, including his secret/not-so-secret crush, River. Having feelings for River is a terrible idea. But what is a guy to do when the annoyingly sexy mechanic is just across the hall?

While Morgan has overcome ugliness and is ready for love, he’s just not sure River ever will be. They have both experienced pain in their lives. So Morgan dares River to take a chance, and love will either break their fractured hearts in more pieces or, just possibly, make them whole again.

Even though this is the 4th book of the “Sunshine and Happiness” series, you can read it as a standalone. I warn you, you may want to read the previous books to get to know the other characters stories too. I definitely want to!

This story is about two men who are at the opposite pole of manliness. Where Morgan is a tornado and flamboyant, River is an introverted, silent type of bad ass. One would think no way they could be an item.

But that doesn’t stop Morgan to persuade his crush aka River.

When Morgan had enough of his father’s so-not so homophobic comments, he decides to move in with Andrew, Owen and River. Everybody knows that Morgan has a crush on River, even River knows that. But he’s not bothered by it. Morgan is still recovering from the attack he suffered. That makes him panicky, but he hides it very carefully. Although it seems River can see through him.

River suffers in silence. He seems that he can’t move on. His boyfriend, Brandon died in a motorcycle accident two years ago now, but his memory still haunts him. He’s convinced, that happiness is not for him. Till Morgan moves in…
River has secrets, secrets no one knows, neither did Brandon, but something inside him pushes him to open up to Morgan and confess. He tries to keep Morgan at arm’s length, but it’s futile. Morgan knows what he wants and he’s not afraid to go for it. This makes Morgan so brave in River’s eyes, he envies the boy.

If you decide to buy this book, and I honestly think you should, you will learn about River’s secrets, his past, Morgan’s struggles, his need to be loved and protected. I would be lying if I said that this book didn’t made me shed some tears, the feelings are genuine, and the style is simple and easy.

Don’t hesitate my dear ones go and get it!