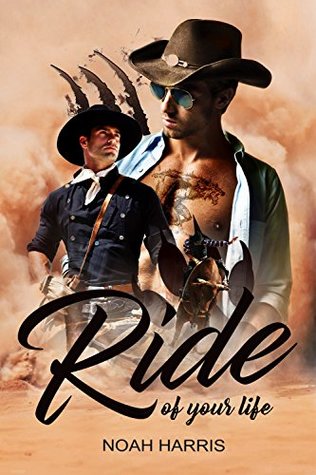 Drake is an omega wolf who just wants to be left alone, which becomes difficult when the Alpha of his pack decides he wants him as a mate. Rather than accept, Drake decides to run, and he’s been running ever since. He relishes in the thrill of the wild and the easiness of freedom. When he runs low on cash, however, he makes a snap decision to head down south to participate in an amateur rodeo to earn the prize money. His only problem? He’s never ridden a bull in his life. Luckily, a friendly trucker points him in the direction of a local dude ranch where he can find a teacher.

Gabe has dealt with a lot in his lifetime and lost many he held dear. It left him hardened and with little tolerance for his own kind. Luckily, he’s spent the last decade in a peaceful life on his ranch, with work to keep him busy and his ranch hands to keep him company. He was prepared to live out the rest of his days like this until a storm in the form of a young Omega came hurtling into his life, single-handedly awakening desires that had long been dormant.

Now the two of them have to decide to keep going on the paths they’ve paved for themselves or to take a chance and blaze a new trail.

Disclaimer: Ride of Your Life is a passionate long novel with over 400 pages packed of lovely man on male action. Very steamy M/M eBook for a mature audience ONLY.

With Ride of Your Life, Noah Harris is returning to his paranormal roots, but with a lot more maturity and skill.

What do you think of when you read cowboy romances? Dude ranches? Alpha men? Horse or bull riding? All those would be expected but what about werewolves, or even…well, I’ll just say another type of paranormal character? Those definitely weren’t on my list until I read this book. Naturally, there’s the usual cowboy action, runaway horses, riding trails and there’s even songs around the campfire, but add in the M/M romance, an awesome paranormal plot with werewolves; then add the well-developed characters, and it’s definitely a winning combination.

Drake is strong willed for an omega, and he likes being alone. He also likes to follow his instincts, but he has a history of running away too. He’s been running from his old pack and more specifically from the Alpha, Julian, for a long time. When Julian finds him, and things get tough, will he run again? Gabe has a tragic past, and as a result, he’s made promises to himself that he fully intends to keep, that is until ‘Hurricane Drake’ hits him and throws his quiet life up in the air. Stan, an old friend of Gabe’s, is the dark horse in this book and revelations about who, or what, he is and his involvement in the plot took me by surprise. I wasn’t expecting that!

I also wasn’t expecting the ‘beauty’ of the writing, yes I did say beauty! It’s an unusual term to use to describe books in this genre, but I stand by it. The descriptions of both the action and more importantly the emotions of the characters are ‘beautifully’ written. ‘Drake’s scent was all around and on the wind. He could smell the horses, the earthy scent of dust and sweat and warm bodies. He could smell the smoke from the fire and the remains of their food. He could smell the night air, crisp despite the fading warmth from the sun.’ ‘Those steely grey eyes, usually so hard and sharp, were like molten silver as they reflected the flickering flames of the firelight.’ Wow!

It’s the awesome skill Noah shows with the written word that lifts this book out of ‘normal’. This is much more than a cowboy romance and more than the usual paranormal erotica, it’s emotive and sensual but written without too much sentimentality. It has the usual Noah Harris fingerprints all over it in the well-described characters, paranormal plot twists and of course the build up of the sexual heat and hot, steamy sex scenes. This is not a short story, it’s quite a long but satisfying read. The epilogue cleverly ties up a few questions left unanswered, and it left me feeling sated but also heaving a sigh that I would have to leave Drake and Gabe behind. If you love cowboys and werewolves, this is the book for you. If you’re new to either then I highly recommend this as a first step into the genre, you won’t regret it.

One thought on “Review: “Ride of Your Life” by Noah Harris”