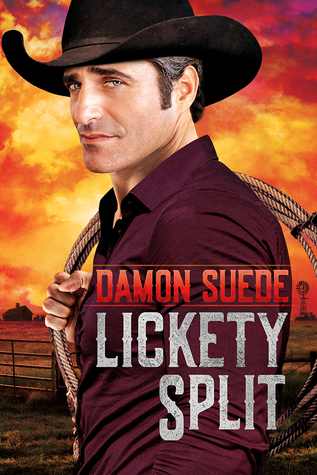 Patch Hastle grew up in a hurry, ditching East Texas for NYC to make his name as a DJ and model without ever looking back. When his parents die unexpectedly, he heads home to unload the family farm ASAP and skedaddle. Except the will left Patch’s worst enemy in charge: his father’s handsome best friend who made his high school years hell.

Tucker Biggs is going nowhere. Twenty years past his rodeo days, he’s put down roots as the caretaker of the Hastle farm. He knows his buddy’s smartass son still hates his guts, but when Patch shows up growed-up, looking like sin in tight denim, Tucker turns his homecoming into a lesson about old dogs and new kinks.

Patch and Tucker fool around, but they can’t fool themselves. Once the farm’s sold, they mean to call it quits and head off to separate sunsets. With the clock ticking, the city slicker and his down-home hick get roped into each other’s life. If they’re gonna last longer than spit on a griddle, they better figure out what matters—fast.

When I first read the blurb for this book I thought I knew what to expect from the story, I was so wrong! This book was just so far beyond what I imagined that I wanted to kick myself for having pre-conceived ideas.

The story is set in the small, East Texas town of Hixville, where Patch Hastle grew up on his parents’ farm. At 16, Patch left home as his parents weren’t accepting of him being gay, now at 22 years old, Patch has had to return to the home and town where he never felt he belonged after his parents die in a car accident. Patch is now a successful DJ in New York and has plans to eventually open a club of his own with his friend. When he sees that by selling the farm as quickly as possible he can get the money together to make his dream become a reality, he works from sunrise to sunset to get the house cleared out and sold so as he can get back to New York and his life. There’s only one problem with his master plan, and that’s Tucker Biggs. Tucker was Patch’s high school football coach and father’s best friend who also lived and worked on their farm land. As a teenager, Patch was tormented by Tucker, but even though the older cowboy seemed to make his life a misery, Patch couldn’t help the attraction and lust he felt whenever he looked at Tucker. Tucker has been left as executor of Patch’s parents’ will, and because of how he used to treat Patch when he was still living at home on the farm, Patch thinks that Tucker will do whatever it takes to stop him from selling the farm and moving on with his life.

Tucker is a bit of a loner who has never been out of the state of Texas. He doesn’t have many friends and comes from a broken home with a not very pleasant childhood. Tucker has had many failed relationships and almost as many illegitimate children under his belt, and at the age of 43 shows no signs of changing his ways. When Patch arrives back in town to arrange the funeral, he meets Tucker for the first time in seven years. Patch thinks that Tucker will behave the same way he did before he left town, but Tucker surprises Patch by being friendly and helpful, which brings the strong attraction Patch thought he left behind years ago back to the forefront of his mind. Patch doesn’t realise that Tucker also has a little secret, men aren’t off limits for him, and Tucker is attracted to Patch just as much as Patch is to him. When Patch discovers this little piece of information, things between the two men get really interesting and also extremely hot and steamy. Tucker loves to be in control, especially of Patch’s pleasure, so out comes his Dominant side and some rope play to take Patch to levels he’s never experienced before. The two men find a connection that they didn’t expect and one that isn’t as easy to walk away from as they thought it would be.

I really enjoyed this book, I wasn’t expecting it to take me on the ride that it did. There were times my heart was in my mouth because I was scared to read what would happen next. Times I wanted to cry because my heart almost broke and times I had to take a few minutes to collect myself because the sex was so damn hot. I absolutely loved Patch and Tucker as characters, the author has done a fantastic job of bringing them to life in the story. The dialogue is written with a Texas twang which adds to the southern charm of the of the story and characters, this is most noticeable with Tucker as his “accent” is so strong you can’t help but completely fall for him. The big tough and rugged cowboy is actually an incredibly sweet gentleman at heart.

There is one thing that slightly bothered me about the story, and that was Tucker insisting he wasn’t gay or queer even though he was having sexual relations with men over a number of years. The way I see it, if you find sexual pleasure with another man you definitely aren’t straight and I feel like this was never properly addressed. It may just be a personal hang up for me, and I may be looking into it too much and finding something that isn’t really much of an issue, but I feel like I had to mention it as I know it could be a problem for some readers. Even with this small issue, I still had a brilliant time reading this book. The story was perfectly structured and was written in a way that completely drew me in and had me wishing I was on that farm in Texas. A great piece of writing and storytelling by the author.