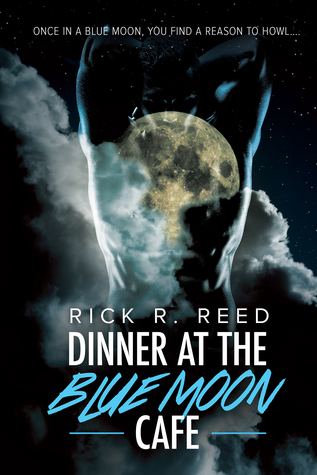 A monster moves through the night, hidden by the darkness, taking men, one by one, from Seattle’s gay gathering areas.

Amid an atmosphere of crippling fear, Thad Matthews finds his first true love working in an Italian restaurant called the Blue Moon Café. Sam Lupino is everything Thad has ever hoped for in a man: virile, sexy as hell, kind, and… he can cook!

As their romance heats up, the questions pile up. Who is the killer preying on Seattle’s gay men? What secrets is Sam’s Sicilian family hiding? And more importantly, why do Sam’s unexplained disappearances always coincide with the full moon?

The strength of Thad and Sam’s love will face the ultimate test when horrific revelations come to light beneath the full moon.

This book surprised me, pleasantly, as I was expecting something in the normal werewolf, romance spectrum and this was different enough to appeal to me. It’s well written with good character development, both good and bad, and I loved the main characters. Thad is at a loose end, he has no job and no boyfriend. His days are spent with his Chihuahua Edith, and his nights, when he can afford it, hooking up with men in the gay bars of Seattle. Thad decides to break the boredom by going out to a new local Italian restaurant and that’s when his life changes completely. He catches the eye of the owner, Sam, and he’s just Thad’s type, dark-skinned, bearded and ‘furry’ and he’s also an awesome chef! The attraction is immediate but after one night of passion Thad awakes to a note from Sam saying that he can’t afford to get involved right now, it’s complicated. Thad’s devastated. He takes a volunteer job to pass the time, and that’s where he meets Jared who’s definitely interested in Thad, but Thad can’t quite get past the memory of Sam. Jared and Thad strike up an easy friendship, but fate intervenes to bring Sam and Thad back together. They agree to see where things go and that includes Thad meeting Sam’s family. He finds out that Sam has a son, but Sam and his family also have a huge secret. The course of true love definitely doesn’t run smooth.

Meanwhile, Seattle has a big problem. Gay men are being attacked and eaten! I really liked reading the killers POV, it made it real somehow. Jared witnesses an attack which shocks him to his core and word gets out that it could be a werewolf! Thad realises that the attacks take place at the full moon which happens to coincide with when Sam and his family are always ‘out of town’. Thad has his doubts and suspicions, but he just can’t make the leap required to believe what’s really going on. Then Jared is targeted by the killer and only just survives, but his attacker dies setting in motion a series of events that lead to Thad having to accept the truth.

Sam and Thad are perfect for each other, the red-headed, natural ‘bottom’ and the dark, swarthy Italian ‘top’. If only Sam could be open and Thad could suspend belief and be receptive to the truth then maybe they would stand a chance. This book has an original take on the werewolf theme which I liked a lot and the intricacy of the plot, and Sam and Thad’s relationship, kept me hooked to the end. The ending, incidentally, could have gone either way and I didn’t know how it would turn out until the last chapter which is refreshing. I would definitely recommend this book