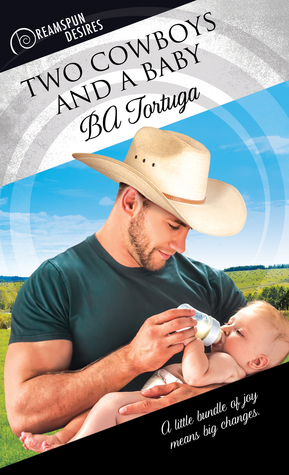 Hoss McMasters has a working ranch, a bull riding career, a nosy momma, and a best friend he’s been in love with since he can remember. He’s a busy, happy cowboy, living the good life.

Then one morning he discovers a baby on his doorstep.

Well, Hoss does what any reasonable man would do—he calls his momma and his buddy, Sheriff Pooter, and they head to the clinic to see if Doc knows of any suddenly not-so-pregnant girls.

In the meantime, Hoss and his best friend, Bradley, have their hands full trying to care for an infant, run a ranch, and deal with the sudden confession that Bradley doesn’t hate Hoss for coming out to him in high school. In fact, Bradley’s been trying to catch Hoss’s attention for damn near a decade.

Two Cowboys and a Baby is a slow burn passion story. There isn’t a lot of details about what happens behind closed doors. Minimal shows of affection, one bj scene and a bit of kissing. And I thought that some parts of the book were glossed over while other parts like when Hoss was injured and laid up were given too much focus. Overall the story was cute for a western, but it wasn’t my cup of tea. Hoss is portrayed as being a dumb cowboy which I didn’t care for. And Bradley is kind of judgmental when he should be supportive to his friend that has never lied to him. I also didn’t think the relationship in parts was believable.
The two guys have been in love with each other for about ten years, and yet when Bradley finally lets it slip that he doesn’t hate his best friend for coming out as gay in high school, they do nothing about it. I get that they had a newborn to take care of, but what about their alone time when she’s down for the night. I did like how they referred to anything sexual as “Fight Club,” as in can’t talk about fight club in front of the baby. That did make me chuckle. The book did have some interesting twists and turns, and the baby was adorable. Overall not a bad story just not for me.

Hoss owns a ranch and is a bull rider. Bradley lives in a trailer on the outskirts of Hoss’ property and is a handy man. Hoss came out to his best friend in high school, and Bradley stopped talking to him for a while and started dating a girl. As a result, Hoss thought that Bradley was straight his whole life. Imagine his surprise when Bradley lets it slip nearly ten years later that he’s also gay and has fancied Hoss all of this time but Hoss hasn’t noticed. To complicate matters further, Hoss finds that somebody has abandoned a baby on his doorstep. While the authorities are trying to find the mother, Hoss with the help of his mother and Bradley will take care of the wee one and fall in love with her more and more the longer they have her.