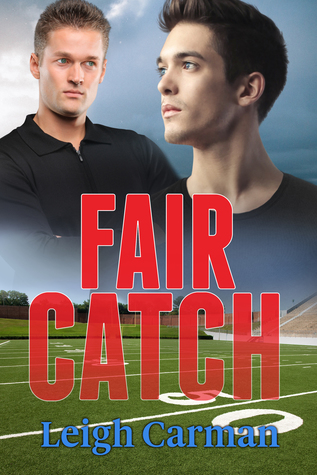 One night of passion.

They never expected to see each other again.

Tobias Bennett is a quiet and unassuming man who teaches yoga and enjoys parkour. Though he is proud to be gay, an abusive relationship with a domineering man has left Tobias wary of romance, and he keeps to himself in his tidy Los Angeles apartment.

Pro football player Sullivan Archer is Tobias’s complete opposite: loud, brash, fond of the spotlight… and deep in the closet. When a hamstring injury sends Van to Tobias as part of his therapy, neither of them is expecting to come face-to-face with his one-night stand. Now they’re stuck together throughout Van’s healing process, and the close proximity will force them to deal with some hard truths. For Tobias, it’s realizing his hookup is a celebrity. For Van, it means accepting that he likes Tobias more than he wanted. They’ll both have to acknowledge that if they choose to pursue a relationship, their lives will change in big ways.

*The Players of LA Series are standalones, but characters from each book to appear in subsequent novels. It is recommended to read in order to maximize the reading experience*

Fair Catch, is book two of the Players of LA series, but it’s basically a standalone as there is no correlation to the previous book. This book follows the characters Tobias (Toby) Bennett and Sullivan (Van) Archer. Toby is a slightly shy and nervous 22-year-old yoga teacher who has only been in one serious relationship and has never had a one-night stand or hookup, even though his best friend Leo is always trying to encourage him to get out and meet some guys. Van plays pro football for the LA Wild Cats and at 25-years-old is one of the best wide receivers in the country, but he’s also very much in the closet and the fear of destroying his career is keeping him shut tight in there.

Toby and Van first meet at a gay nightclub in LA when Van spots Toby standing at the bar. Van asks his friend and club owner Griff to bring Toby to his office so as he can speak to him, as he can’t go out and pick Toby up in the club himself because he can’t risk being recognised or outed by someone. Toby doesn’t know who Van is and is surprised that a man as attractive as Van would even look at him and thinks Griff has picked him by mistake. There’s an instant attraction between the two men and after a few words pass between them, the little chat soon becomes much more, and Toby breaks his own no one-night rule. A few weeks later, Toby is teaching his yoga class when in walks Van who has been sent there by his team trainer to increase his flexibility after sustaining an injury during a game. Toby is shocked to see Van and the men soon get reacquainted. This meeting begins a series of liaisons and also misunderstandings that bring Toby and Van both joy and pain. Their road to happiness is far from smooth, but in the end, the two men can’t deny what their heart’s and head’s are telling them.

Although the story and plot were pretty predictable, it was actually quite an enjoyable read. The book is written in first person with dual POV, which is something that I really love, I always like to see a story from each character’s perspective. I’m also a huge sports fan, so the fact it was about football made me very happy. The author seemed to have a good understanding of the sport and terminology which definitely added to my enjoyment of the book as there is nothing worse than reading a story where you know the author has just tried to add in something for the sake of it. I liked the characters a lot, especially Van, as he was so different to his public persona. Toby and Van’s friends were also really well written, which brought the whole story to life and made me want to know more about them. Leo in particular, seems like a really fun guy and I hope the author gives him his own story along the line somewhere.

Now, I do have a criticism, and it was quite a big issue for me. The way the story is written makes it feel quite rushed, chapters/POV’s end quite abruptly and when the new chapter/POV begins there is often a time jump which makes it feel like chunks of the story are missing. This is most noticeable in the first few chapters. On more than one occasion I had to skip back to the previous page because I thought I had gone too far forward and had missed a page or section of the story out. This did cause some confusion and did affect how the story flowed, but didn’t affect how I felt about the book overall. The author has done a good job of writing a story that grabs your attention and keeps you interested the whole way through. At the end of the book, we also get a little sneak peek of the next story in the series, and I have to say I’m really looking forward to it.