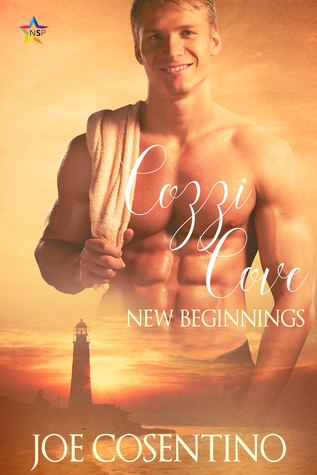 Welcome back to the romantic and magical place called Cozzi Cove, seven guest bungalows on the New Jersey Shore.

This summer, Cal and his new husband, Michael, along with sister, Taylor, and her wife, Carla, prepare for the first in the next generation of Cozzis. To add to the action: Cal finds his great-grandfather’s diary, exposing a shocking surprise; Michael and Taylor weigh new job opportunities that could take them far away from Cozzi Cove; red-letter Christian and new houseboy, Billy Dean, gets his wish when meeting Jesus and John at the cove; summer guest, Nijad, can’t decide which sibling he prefers—Annabel or Andrew; and Jonathan, an occult enthusiast, encounters a sexy vampire.

As usual, nothing is as it seems when romance blossoms once again at Cozzi Cove. What secrets, mysteries, and passions lie waiting to unfold? Find out in Book Four of the Cozzi Cove series.

Joe Cosentino does it again. The fourth outing for Cal and Michael and the characters of Cozzi Cove is yet another winner. A fresh set of guests arrives at the bungalows set for a quiet week. Alongside the guests’ stories, there are revelations about Cal and his tight-knit family and mysteries to be unfolded.

Residing in bungalow 1 is Carla, Cal’s sister-in-law. She’s heavily pregnant, acting as a surrogate for Cal and Michael, the next generation of Cozzis. I loved the scenes with Cal’s sister Taylor behaving like she’s the one carrying the baby, hilarious! In bungalow 2 is Malcolm Wolf an ex houseboy at the Cove from when Cal was a teenager. He’s married but not honest about his sexuality and according to Taylor he used to have a crush on Cal. Malcolm is now senior editor of a magazine and he offers to mentor Michael in his photojournalism career. But does he have an ulterior motive? Bungalow 3 is taken by Jonathan Harper, a tax auditor, who’s there for a local horror convention and who just happens to bump into Vlad Lesti, an actor playing Dracula at the convention and staying in bungalow 4. Vlad says he’s straight but will he still believe that by the end of the week? Their story is beautifully mirrored by that of their dogs which is a nice touch. Bungalow 5 houses Nijad Hadad, a bisexual travel agent who gets entangled with Andrew Urban in bungalow 6. Andrew and his ‘sister’ Annabel are flight attendants, but with a huge secret that may well ruin any future, they might have with Nijad. Two more of Kamael’s Angels (Kamael’s story is in book 3) are in bungalow 7, Jesus and John, who set out to help Cal’s new houseboy, Billy Dean. Billy Dean is a committed Christian and carries a signed virgin card. He fully believes in no sex before marriage, but how will that work when he meets Jesus and John? Some of the most humorous lines in the book are when Billy Dean quotes his grampa, they had me laughing out loud.

As well as the guests’ stories there is, of course, the Cozzi family story running alongside. Cal finds his great-grandfather’s diary from 1937. For me, this was the most poignant part of the book. The way Cal’s great-grandfathers’ story mirrors that of himself and Michael is clever, and the final twist at the end is awesome, bringing a real sense of closure and warmth. The ending not only sees the guests’ stories tied up, as they leave Cozzi Cove but also brings together some of the family members and friends we’ve met in previous books. They arrive for a very special occasion and, no, I’m not giving it away!

I thoroughly enjoyed this outing to Cozzi Cove, as I have the previous ones. If you want characters that win your heart and make you laugh and cry and endings that leave you feeling really satisfied, then these books are definitely for you.