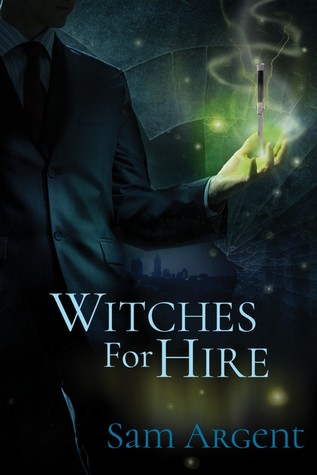 All recovering drug addict and witch Jeremy Ragsdale wants is to shamble on to the next job without any disasters. Instead, the temp agency saddles him with a fellow witch who hates him, an Amazon one violent outburst away from deportation, and a knight from another world as his boss. Even worse, their jack-of-all-trades magic business stumbles upon a conspiracy to kill Desmond the Great, Atlanta’s sexy star magician. Jeremy must prevent it without letting his colleagues know that he not only has ties to the energy vampires behind the plot, but that his past misdeeds might have instigated the attacks.

Despite Jeremy sporting a suit and tie like a good witch, his lies snowball to bite him in the ass. The lack of trust brewing between him and his teammates could cost Desmond his life and Jeremy his progress on the straight and narrow path if his secrets are revealed. Because no matter how much Jeremy has reformed, there’s still enough bad witch in him to kill anyone who messes with him or the people he cares about.

What the hell did I just read?!

Well, this is the weirdest book I have ever read. So why the high rating?! Because it was freaking amazing!

Did you ever a read a book you hated and the same time you loved it? No? Well neither did I until this…this…I don’t know.

For the first 30 % of the story, I was wondering if this book is reason enough to smash my e-book to the wall to buy myself a new one. Well, I’m glad now I was against my “brilliant” idea!

This book is a multimillion POV book. Every character of this book will say it’s part of the…story? Well, the plot is not so clear till the second half of the book. I was going back several times to see if this is the book of what we request to review because there was no MM in it at all. But then things changed and we’ll find out what the author meant by MM. Damn, she is good!

Well, the book has four major MC, which we’ll get to know pretty much but also with a lot of secrets or hidden agenda. This is not your usual romance novel. I wasn’t sure it was romance at all, just after I read more than half of the book.

The constant change of POV will keep you on edge, and not in a good way. A million things will go through your head to figure it out WTH (what the hell) it’s really going on?!
But the book is great! It’s angsty and hot!!! And by hot I mean steamy hot! It’s borderline Dub-Con and BDSM. But it’s kinda not…? You would think Desmond is a prick, but he is really really not. Anyway, if Jeremy would have a Facebook account at “in relationship” section you would find: “Complicated”. And oh man this time Facebook would be so right!!

So it’s an honest 4.5 Star I enjoyed reading this book!!!