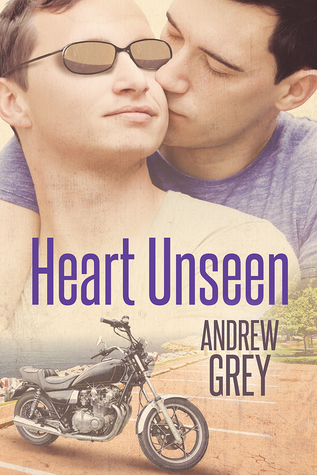 As a stunningly attractive man and the owner of a successful chain of auto repair garages, Trevor is used to attention, adoration, and getting what he wants. What he wants tends to be passionate, no-strings-attached flings with men he meets in clubs. He doesn’t expect anything different when he sets his sights on James. Imagine his surprise when the charm that normally brings men to their knees fails to impress. Trevor will need to drop the routine and connect with James on a meaningful level. He starts by offering to take James home instead of James riding home with his intoxicated friend.

For James, losing his sight at a young age meant limited opportunities for social interaction. Spending most of his time working at a school for the blind has left him unfamiliar with Trevor’s world, but James has fought hard for his independence, and he knows what he wants. Right now, that means stepping outside his comfort zone and into Trevor’s heart.

Trevor is also open to exploring real love and commitment for a change, but before he can be the man James needs him to be, he’ll have to deal with the pain of his past.

Heart Unseen by Andrew Grey was a delight for me to read. Trevor and James were such complex characters, and they were beautifully developed. The storyline and plot were compelling and had many twists and turns. The story was nicely paced and clinching. I ended up reading it in one sitting late into the night. I had to see how the story ended and the author did a great job of tying up all of the questions that I had.

Trevor’s used to getting any man he wants with his charming good looks and having passionate, no-strings-attached flings. He was happy with his life until he tried his charms on a guy that blew him off and just looked through him. I loved that he had to drop his routine and connect with James on a more meaningful level. I loved the man that Trevor became and how he interacted with James and their chemistry was smoking hot. I also enjoyed how natural Trevor was at guiding James and how James brought out all of his protective instincts. But even though his protective instincts were triggered, he never treated James like a child. He always treated James like an adult.

I loved how Trevor described James to his friend Brett when he saw him for the first time. He described James as “angelic,” and I couldn’t agree with him more. James was such an independent, strong and loveable person. The way James explained how he “sees” the world as a blind man vs. how he’d seen the world as a normal person before losing his sight was wonderful and insightful, and I loved it. I also liked his job and how he used his experiences to help other kids that are just going blind or have just gone blind.

Brett and Dean were also great supporting characters. Brett was a great friend. Dean was a little on the selfish side after his breakup with his boyfriend. He wanted Trevor to be his wingman and go out to the clubs with him, and he wasn’t very supportive when Trevor and James started dating, and Trevor stopped going to the clubs altogether. Eventually, Dean got over himself and was happy that his friend had found a man to love and have a mature relationship with. I would love to see Brett and Dean get their HEAs also.

I can’t wait to read more books by Andrew Grey.