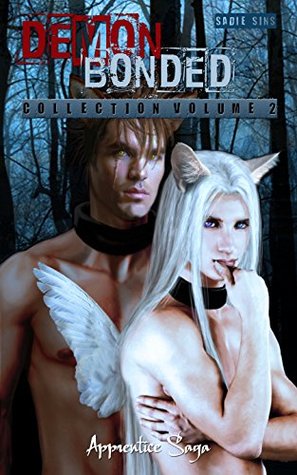 Ky’s recovery from the overseer Demencious is short lived. His parents have lost all trust in him, and Ky again has to wonder if he’s losing his mind. That is until he starts his first art class at his new college, and meets an actual sorcerer apprentice.

Liem Kane could have been a typical teenager, but there is something terribly wrong beneath his well-groomed exterior. His demon, Fido, is twisted and abused, the wolf Relic tormented daily by his young master.

In his quest to save Fido from certain death, Ky must face Liem’s master. A demon trainer of cruelty that far surpasses his young pupil, Tobias has no qualms in murdering those that disobey. Ky faces off against this monster among men. It’s kill or be killed, and Ky isn’t sure he can live with either option.

This book follows Demencious Saga with episodes #5-9. This is one of those series that builds quickly. We are back with Ky as he stumbles along trying to protect those who want to either control or destroy the relics. Each episode he learns more.

Episode five picks up right where the previous one ended. Here while the human bonds get colder, the demon bonds get stronger. Ky is beginning to see who he is and what’s important. The responsibility he feels for the demons in his care. He’s also finding out what he gained in the bonding process as well. This has all been new to him and he’s had to learn not only from Lovely and Feral but from each new experience is adding to it too. He’s also teaching the demons about him. How truly caring and concerned he is for them.

Episode six is where most of the groundwork for the rest of the book is laid. This is where the chain of events start to connect Ky’s magical life at home to those that are around him. We meet Lien, who’s instrumental in getting Ky to have a further purpose and concern. Seeing how he’s different from other sorcerers. What he sees as his weaknesses and where he lacks knowledge.

When you get to episode seven, then you see the changes that Ky starts to go through. Because of his trusting nature, just how vulnerable those he cares for are. He’s chosen his true family and fights not only for their physical safety but their mental well-being as well. He sees that he needs to learn more for their protection. He takes the demons’ pain to heart and hurts for them. Never thinking of himself but instead how he can save and protect the relics. While those he holds dearest think of his safety and mental well-being.

Everything comes together in episodes eight and nine. Showdowns not only with outside forces but at home as well. A lot of things are learned, and the stage for the next saga is set. By the time I got to the end, I was eager for more. Sadie Sins has created a world of magic and morals, love and sacrifice. A place where the worst monsters are human and the demons more like knights.

One thought on “Review: “Apprentice Saga” by Sadie Sins”