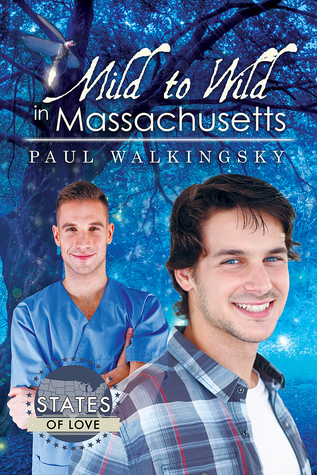 Brett has spent twenty-seven years trying to be perfect for the Mormon grandparents who raised him. Unfortunately, doing so has meant missing out on lots of life experiences—and denying a major part of who he is. Now that his grandparents are gone, Brett is ready to make up for lost time, break out of the sedate façade he’s always presented, and do something he would have never considered before: attend a gay men’s spiritual retreat in rural Massachusetts.

It might be a spiritual retreat, but Brett must learn to embrace his physical reality if he’s going to grab on to his chance at love.

I had the opportunity to read Mild to Wild in Massachusetts by Paul Walkingsky, and I have to say that I think the book had some missed opportunities to it. I do want to state that I loved the blurb for the book it was very catchy and made me want to read it. So kudos for snagging my interest. I was expecting lots of wild oat sowing and some pretty hot scenes which I did eventually get when the book finally got to the retreat part. However, the book is only 74 pages, which isn’t very long. The first five chapters are all about why Benjie (later changed to Brett) doesn’t want to be a screw up like he considers the rest of his family and why he decided to stay a closeted gay. Although the first five chapters are well written, I was bored reading them and kept asking myself when we would get to the good stuff that the blurb promised.

I wasn’t disappointed with the retreat portion of the book. It was hot, and I especially loved the parts about the erotic message and body painting. Another missed opportunity for me was the ending. It’s stated a couple of times that because of all of his vacation time available that Brett has booked a week in Boston to continue to explore himself, but we never get to see it. I would have been so much happier to read five chapters about his week in Boston after the retreat then the first five chapters of the book. He could have continued to explore his new relationship with Kyle or even looked up his seatmate from the plane who gave him his number. So yeah, a missed opportunity in my opinion.

Okay so on to the good part of the book, the retreat. I loved this part of the book. Brett meets so many diverse people at the retreat that help him become more comfortable and confident in his body. Walter, who has an agreement with his wife that he gets to come to these retreats to get his other needs met since he’s a teacher at a Wisconsin school. Jared who’s default setting is a hound dog and shamelessly flirts with everybody. Danny, who is from Connecticut and who’s body is the exact opposite from Brett’s and who has the pleasure of being Brett’s erotic massage partner. Karl, who is filled with lots of great pieces of wisdom and is very supportive of Brett getting out there and sowing some wild oats before settling down. Although Karl does jerk Brett around a little bit and sends some mixed signals, and Brett accidently hurts Karl’s feelings, they do manage to work it out in the end.

The sowing of the wild oats isn’t about sex for Brett because at the end of the book he’s still a virgin. But for Brett, it’s about him being more comfortable and confident with his body after each of his classes. And now you can see why I wanted those extra five chapters at the end of the book. I would have liked to see more of Brett and Kyle.