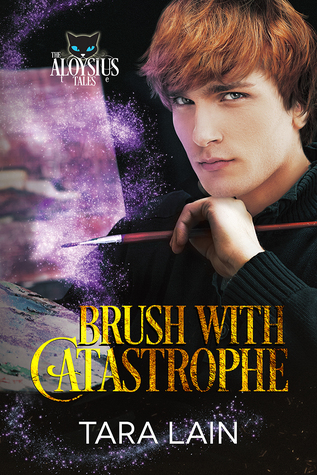 Sammy Raphael is a crappy witch, and on top of that, he can’t seem to get a boyfriend. Where other supernaturals can bring down lightning and manifest wealth, Sammy can paint. Granted, the “prophetic” paintings he creates at night always come true, but they never predict anything important. Sammy feels like a total loser with a worthless ability.

One night he paints a gorgeous guy who turns out to be his secret crush, the human Ryder, but Ryder’s changed so much he’s almost unrecognizably beautiful. Then Sammy paints an angel who turns out to be a witch. But is that witch also a devil—a devil who can bring down Sammy’s whole community and everyone he loves? And why the hell does Ryder keep changing? Aloysius, the black cat familiar, always backs a winner. So why is he backing Sammy?

Brush with Catastrophe by Tara Lain is part of the Aloysius Tales series and it was absolutely amazing. I have become a huge fan of Tara Lain, and the way she writes has a way of keeping me energized, focused, invested, and guessing on how the storyline is going to go and then being proved completely wrong as she throws in a twist that I didn’t see coming.

Brush with Catastrophe had so much emotion and passion, and I love when the main characters are allowed to cry. So many books are still going with the age old saying that it isn’t manly to cry and I love that Sammy and Ryder are secure enough in their masculinity to show how they are truly feeling at all times.
Sammy is a great character and has some very realistic insecurities. He is a witch, but he feels that the power that he has received is pretty worthless. He would rather be able to call down lightning and manifest wealth. However, he is a prophetic painter, and although what he paints always comes true, he hasn’t painted anything that’s very important. He has also been in love with his straight, human best friend Ryder. And of course, humans aren’t allowed to know about the paranormal world let alone date one.

But Ryder isn’t what he seems. Come to find out, he isn’t straight or human and he is on a quest of his own. He has also been forbidden to have a relationship or interfere with the people around him. He is there only as an observer before having to go home. He has also been in love with his best friend Sammy for a while. However, he hasn’t been able to physically act on his feelings until his body has entered into adulthood. Ryder is there to put Sammy back together after his relationship with Lucien goes bad. And although it was sad that Sammy had to go through what he did with Lucien, I did like that it was the catalyst that was needed to get Ryder to confess his feelings to Sammy.

Brush with Catastrophe has everything that I look for in a book. It had friends that will do anything for you, a lover turned villain (Lucien), a straight best friend (Ryder) that isn’t as straight as you thought and suddenly isn’t as unavailable as you thought when he confesses that he’s wanted you just as much, a glorious battle between good and evil, and some very, very steamy passion-filled scenes.

I recommend Brush with Catastrophe to everybody who likes a little magic with their happily ever after. I can’t wait to read my next Tara Lain book and get swept away on my next adventure.

One thought on “Review: “Brush with Catastrophe” by Tara Lain”