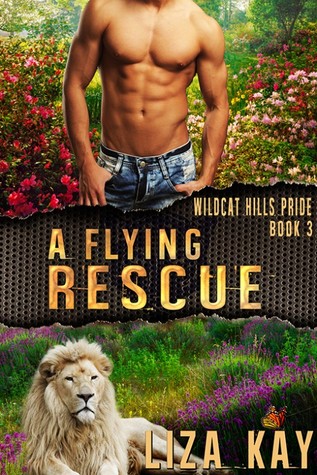 Bravery isn’t a matter of size, but one of the heart.

Math geek Asa Tibbs is no wilting flower, despite being a butterfly shifter with a reputation for fragility. When he learns his mate has been kidnapped, nothing will stop from rushing to his mate’s rescue. Least of all any objections by the Wildcat Hills Pride, whom he’s conveniently neglected to seek permission from.
Xander Powell, alpha of the Pride, is chagrined beyond belief. Not only has he been captured by a gang of deer shifters—an insult to his masculine pride alone—but he’s become the new main attraction of a rinky dink circus? And he can’t even shift to get out of his situation, not without alerting humankind to the existence of shifters among them. What’s a lion to do?
Help arrives on colorful wings when the big beautiful butterfly that is Asa tumbles into Xander’s cell. Together, the two men escape the circus. But their journey home is just the beginning of the honeymoon from hell…and what they discover along the way will shake the foundations of the paranormal world.

I liked A Flying Rescue by Liza Kay.

This is the first book in the series that I have read, and as such, I was a little lost until I got to know the characters and who had done what.

I think I would have enjoyed the book a lot more if I had read the other two in the series first. However, I did still greatly enjoy both Xander and Asa and all of their packmates and friends. The characters were nicely developed, and I liked how they interacted with each other. However, the books sound like they have a background plot that runs through the series even though the books are each about a separate couple. So I would recommend that you start at the beginning of the series before reading this book to get to know the characters and the circumstances that have made them the way they are. The ending of the book was left open for another book in the series, and I’m hoping that it will be about London and Donovan.

I loved how strong Asa is and how he doesn’t fit into the omega mold. I liked that he didn’t want to be thrust into being a permanent bottom just because he’s slim and smaller than Xander and I liked that Xander was secure enough in his alpha-ness that he would allow Asa to top also. I liked that Asa rescued his mate and that they had a rocky honeymoon while having to deal with corrupt council members and assassins trying to kill Xander and then later his pride.

I can’t wait to see what happens with the corrupt council as that seems to be the background plot that’s running through the series and since it wasn’t tied up in this book.