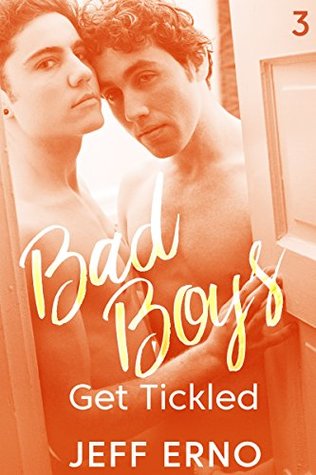 Isaac has been extremely ticklish for as long as he can remember. As a kid his best friend Ty used to hold him down and tickle him, but once they started high school, they drifted apart. Isaac came out as gay kind of young, but Ty never revealed his sexual orientation, and as a result Isaac felt sort of abandoned by his best friend. Now, a few years later, they’re both home from college and run into each other in a bar. This leads to a confrontation and a dispute that can only be settled the good old fashioned way—tickling.

Bad Boys Get Tickled is the third book in the Bad Boys series. I enjoyed the story but couldn’t really connect with the characters. I’ve never been very ticklish as I have an older brother that loves to tickle torture. So I quickly had to learn not to be ticklish. As a result, I wasn’t as into this book as it centers around tickling. That being said, the book was still very entertaining, and I loved the chaise tickle recliner that Ty had made. Isaac is adorable with his bratty attitude and how he loves to antagonize Ty until Ty will discipline him and hold him down and tickle him. The book was well written and nicely edited although there were a couple of instances where an article in front of a word should’ve been used and wasn’t. But it wasn’t too distracting.

Isaac and Ty were friends in high school, and Ty found out that Isaac was intensely ticklish. Isaac was still trying to figure out his sexuality and had a love-hate relationship with being tickled. As he got older, it became a trigger for him to get aroused when he was held down and tickled. And he loved being held down and tickled by Ty who was so much taller and stronger than he was. However, in high school, he thought Ty was straight and didn’t think his crush on his best friend would be reciprocated. They didn’t end up reconnecting until after college.

Isaac ends up seeing Ty at a gay bar hanging on a blond college-aged twink, named Trevor. Isaac is mad at Ty when Ty admits that he knew he was gay in high school and didn’t say anything to him and then avoided him when he came home during summer breaks. Isaac lets his bratty and impulsive nature out and orders a drink and then proceeds to throw it on Ty. What happens next is exactly what Isaac wants to happen. Ty carts him off to have the most extreme tickle session of Isaac’s life.

Lots of giggling, squirming, jerking, twisting and pleading ensued and all have a good time. If you like tickle torture, then this is the short story for you.