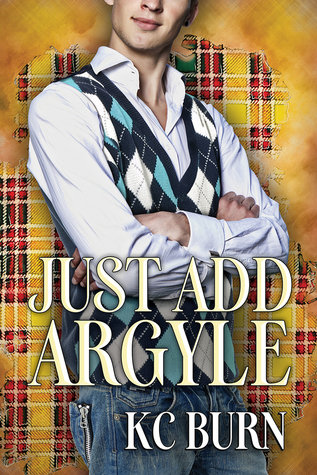 Tate Buchanan is a troublemaker who can’t keep a job, no matter how many times his lucky argyle sweater gets him hired. Add to that a learning disability and an impetuous nature that sends him into altercations to protect the defenseless, and he hardly manages to make friends, let alone find a man who’s interested in him for more than one night.

Most people think EMT Jaime Escobar is a player, but the truth is he wants a serious partner—he just can’t justify wasting time on guys he knows aren’t a match. But when he treats a gorgeous redhead after a fight, he finds the spark he’s spent so many years looking for.

Jaime wants to take the next step with Tate, but it’s clear Tate’s not going to curb his impulsive behavior—his next fight sends him to the hospital. Jaime’s relationship with a near criminal isn’t something his family is ready to accept, not any more than Tate is willing to be kept a secret. Jaime will need a lot of understanding—and some luck of his own—to keep them both. But this is one fight he’s going to see through to the end.

Just Add Argyle is a stand-alone story, but the third book to be released in the Fabric Hearts series. Characters from the other two books are also involved in this story, but they are integrated well without any issues or making you feel like you’ve missed something.

Tate Buchanan has a hard life. He lives with his alcoholic, drug addict mother, who simply doesn’t give a damn about him. Tate has been taking care of himself since he was a child, but can never seem to catch a break no matter what he does. He dropped out of high school because he couldn’t grasp what he was being taught, and was never able to pass any tests. Thinking he was stupid—just like his mother kept telling him—he decided to just give up. We find out throughout the story that he actually has a type of number dyslexia. Tate works in low-paying, unskilled jobs that he keeps getting fired from, so spends most of his time at the library or wandering the streets to avoid going home to his mother. One night, after being fired from his latest job, Tate goes to the mini-golf course where he used to work to hide out for a while. When he arrives, he discovers someone he used to work with being assaulted by two men, Tate steps in to stop the attack and ends up taking a bit of a beating in the process. The police and ambulance soon show up, and Tate comes face to face with the man that will change his life and everything he has ever thought of himself.

Jaime Escobar is an Army veteran, who now works as an EMT. He has seen and been through a lot over the past few years, and as a result of fighting in Afghanistan, Jaime suffers from PTSD. He comes from a big family, where everyone gets involved in everyone else’s business, but Jaime always tries to change the subject or deflect whenever they try to interfere in his love life. He wants to settle down and find a long-term partner and not just a one-night stand, but the only person who ever made him feel this way—even though they were never romantically involved—died in his arms in the desert. When Jamie answers a call-out for assault, he doesn’t expect to meet a man who lights a fire in him that he thought had long died out, even if he does have to break down some barriers to get to a place of peace and happiness.

When I first started this book, I really struggled to get into the story and seriously considered giving up a couple of times. I felt that the first few chapters dragged on more than they needed to and that there were parts that seemed to go off on unnecessary tangents, but I stuck with it, and I’m so glad I did. When we finally get into the story where Tate and Jaime meet and then get to know each other, the whole feel and flow of the story changes. It becomes a much more enjoyable read that touches on some serious issues, and does so in a very sympathetic way. Tate and Jaime’s love story found a place in my heart that I couldn’t imagine it would have when I first began.
The ending was so utterly adorable and perfect that I need to give huge credit to the author for turning the book from something that I thought I was going to dislike, into something that had me beaming with joy.
Now I need to go back and read the previous two books because I’ve kind of fallen for these characters and want to know a little more.