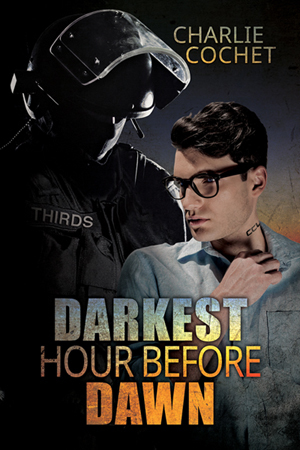 THIRDS Team Leader Sebastian Hobbs and Chief Medical Examiner Hudson Colbourn are as much in love now as they were nearly seven years ago when a tragic event on the job destroyed their relationship. The two drift together only to be pulled apart time and time again. When Hudson draws the interest of dangerous enemies, both within and outside the organization, Seb wants nothing more than to protect the man who still means everything to him.

As life and death events, an uncertain future, and startling truths draw Hudson and Seb to each other yet again, they must make a choice: trust their love and take strength from what they share, or lose what matters most for good this time.

Since when were we waiting for Seb’s and Hudson’s story? It seems decades…but finally, it’s here…and I loved it! Every single word of it!

We know our sweet Hudson from quite the beginning of this series. He was always present, in the background, in almost every book, if not in all. We knew him as an English bloke, always calm, always with two feet on the ground. But we knew little about his background. Now, in this book, we will find out more…much more. Then with time, we learned that actually, Hudson is Sebastian Hobbs marked mate, but unfortunate events set them apart. Well, actually, Hudson set them apart, and we will learn why.

Even though Hudson decided to go separates ways, he can’t, he just can’t have anybody else in his life. He can’t move on, because…well…Seb is his mate!

The Doc’s relationship with Ninna is straggled too. She’s lying to him about her relationship with Seb’s brother Rafe the oldest of the Hobbs siblings, and it spoils his trust toward his best friend. Hudson is lonely…

Sebastian Hobbs, Team Leader for Theta Destructive, is tired of being apart from Hudson. He’s going out of his mind that he can’t be there 24/7 to protect his mate from the possible threats. Then when he gets called by Lieutenant Sonya Sparks, who offers him an interesting deal, Seb, very Therian like, told her to shove it. He doesn’t want to become a puppet of hers. But the threats are there, Hudson is in danger and the knowledge that his mate is stalked by Wolf, who tortured and almost killed Dex, doesn’t help either.

Events bring them together, events I know you wanna know but I’m not telling you…what?! Me?! mean?! Wow…I never expected from you to hear that…I’m offended!

No spoilers guys, but I promise you, you will not be disappointed. Although tissues needed! So go to your favorite shop and stock yourself with it…you’ll cry…a lot…the book is amazing. The story of these two is the most emotional of the series.

We learn about more characters too like Dom or Wolf. The Hobbs family…and the end…oh my, the end…tissues guys, tissues!