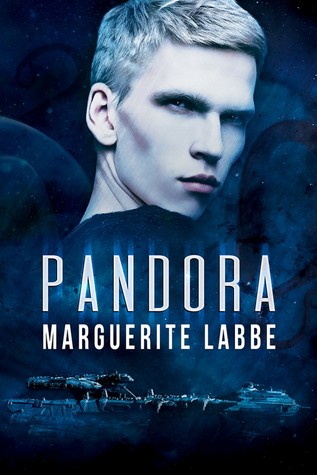 Haunted by the screams of the men he murdered, ex-Marine medic Riff Khora is serving a life sentence on board a prison ship. Seeking more punishment for his crime, he strikes a deal with the corrupt Captain Vidal—an exchange of pleasure and pain—and forges a new life leading the team that surveys space wreckage for salvage.

Ship engineer Zed Jakobsen’s psychometric abilities make prison a sentence worse than death, and the barrage of emotional stimuli is an unending torment. His only regret is that he didn’t kill the monster who sent him to prison, and only a glimmer of hope to escape a judgment he doesn’t deserve keeps him clinging to a brutal existence.

When they board derelict ship Pandora and discover a lone survivor, the hell of prison life plunges into abject horror. An epidemic of violence and insanity consumes their ship, driving the crew to murder and destruction. Mutual need draws Riff and Zed together, and their bond gives them the strength to fight a reality they cannot trust. But Vidal possesses the only means of escape from the nightmare, and he’s not letting anyone leave alive.

First Edition published as Pandora in the Deep Into Darkness: Aliens, Alphas and Antiheroes Anthology by Smashwords, 2015.

From the blurb, I was in awe with this book.

The book is a Sci-fi Romance. The plot it’s happening somewhere in the future on a prison ship.

The ship is under the command of Captain Vidal who, we learn that is a sadistic awful man. His kink is breaking down the lifers to the point of no return. Him being sadistic has nothing to do with the need of Riff to be dominated. But Riff is punishing himself…

The story starts with Zed being recruited on a salvage mission lead by Riff. Riff can deny his attraction to the shorter man. It seems he has a type, short and dominant. Riff being the toy of Vidal (which Riff has agreed too) he doesn’t experience the emotion part of being dominated. He doesn’t like to be humiliated neither, him having a leader character. But Vidal humiliates him constantly. Vidal is harsh and has no limits, although Riff asks for more pain for more suffering…

Zed having some psychic powers, he’s able to sense the real need in Riff. He never considered himself dominant, but something inside Riff makes him want to dominate this strong, compassionate man. Zed carves Riff total submission.

Riff wakes up tied to his bunker, and he hurts everywhere. He doesn’t know what really happened. But the carnage around him makes him sick. He fears for his team, so he goes to find them.