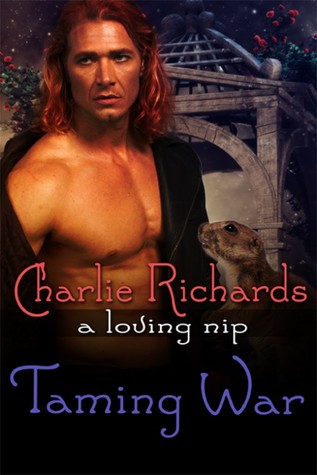 Just a little Love Bite: When the unexpected happens, it doesn’t always mean the end.

When the Horseman of War decides to have a little fun and he accompanies a favored demon into the human realm to join in a skirmish, he never expects to meet a vampire that jumpstarts his libido. A romp with Monte Hanover would be fun, passionate, and maybe even worthy of a repeat…after they finish the battle, of course. To his surprise, he helps rescue a prairie dog shifter that brings out protective instincts he didn’t even know he was capable of. Unfortunately, little Xerxes turns out to be Monte’s beloved. Scratching his itch with either man seems unlikely. Then, the unthinkable happens, and he realizes without his intervention, it would mean the death of both men. Can he take that leap? Or will War decide two lives, in the grand scheme of things, isn’t really worth the changes he’d need to make?

This was a very charming and sexy read. The author did a great job of getting right to the characters and getting me intrigued from the get go. Even though this is book 12 of this set of the series, I felt good about the focused characters in this book. I must say I will be reading the series now because I really enjoyed this book.

First, I got to meet War, one of the Horseman of the Apocalypse. He is listening in on a conversation that Monte, the vampire, is having with the master vampires. See, War has the hots for Monte, but Monte can’t stand the sight of War. War is there to help the vampires fight a war with priests that want to wipe out the vampires. The master vampire, Dante, has paired Monte and War together for the next mission. Monte is really trying to get out of the arrangement.

War is seven and a half feet tall with red eyes, large horns and huge bat-like wings of pure sexiness. He teases Monte constantly, and Monte turns him down at every turn. Before entering the war zone, War kissed Monte with such passion, Monte couldn’t fight it. He couldn’t hide the lust he felt. And just like that, they go to the war zone and slay priests around every corner.

As War makes it to where the prisoners are held, he discovers a priest that overly enjoys torturing people, we get to meet Xerxus. He’s the adorable prairie dog shifter. He has been blinded from torture. He’s a scared little thing, but as soon as War rescues him, he snuggles right up to him. As Monte enters the cage, it is apparent that him and Xerxus are mates.

That’s where I will leave you all hanging. I love these characters and their chemistry and their struggles. This story will have you feeling scared for them, feeling love for them but you will also feel happy. And the hotness in this book will have you wiggling in your seat.