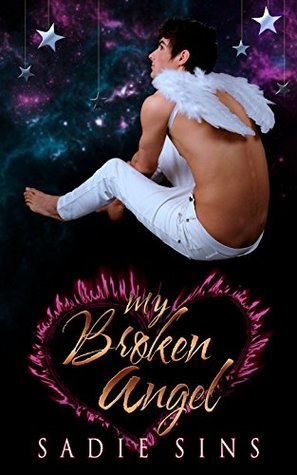 An angel-demon halfbreed just falls into my lap. Okay, he bleeds all over my shoes if you want to get technical. Moments later, this total stranger also manages to steal my heart.

Damn, I don’t even know how to explain this.

Have you ever met someone and just known they were the one? I thought I had until I met Danyal. I thought after eighteen years of living I knew all about love and meant to be and heartbreak. Then this damn bastard of a gorgeous fallen angel bleeds all over me, nearly ends up dead, and tears my reality in half. The wings don’t help. The kiss? The kiss makes me realize Hell is real and far hotter than I could ever imagine.

Discovering I’m bi is way less mindblowing than finding out my soulmate comes from a different realm of existence with bloodthirsty demons hunting him down. Worse, the longer I know him, the more I see it’s the demons in Danyal’s head that are going to kill him first.

Getting Danyal to stay and be mine is going to take an act of God. Or maybe a favor from the guy down below.
http://www.sadiesinsbooks.com

When I heard that this book was coming, I started thinking about what direction the author would go. Drunk, Blind, Stupid Cupid had an angel, a half angel, and an angsty new adult. How could that be topped? Well, Sadie Sins found a way. While still retaining the humor and sexiness that was so key in the first book, she added a darker edge with a realistic feel.

Ben is Aiden’s best friend. He sees how happy Aiden is in his relationship and wants to have it for himself. While on a date with a crush he meets her brother, and discovers something new about himself. He realizes that he’s bisexual. Already insecure, this just makes it worse for the eighteen-year-old virgin.

Danyal is a halfie. His long white hair is very rare in someone who’s half angel half corrupt. This made him a favored pet in the pit and made the other halfies very jealous. Finally escaping and being severely wounded, he wants to see his chosen before he dies. He’s very traumatized by what has happened to him in his life.

Between Ben learning not only about himself but about the existence of angels and demons plus Danyal learning how to live free from slavery for the first time, you wonder how they can be together. From meeting to blood bonding and fighting their own fears, the journey to a full bond is rough. Their actions will confuse and hurt each other even after a full bond.

Sadie Sins has once again delivered a story full of all the things that make a great read. With humor, joy, pain, and passion she has written a great story. As with her other books, this could also lead to more in the line or be the stopping point. I look forward to wherever her creative mind leads her.

One thought on “Review: “My Broken Angel” by Sadie Sins”