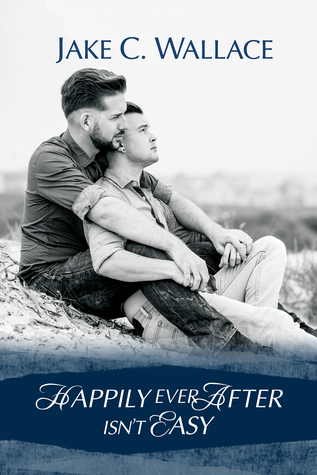 How do you start a new life when your old one won’t let go?

Freed from a marriage he entered because he feared coming out to his judgmental family, Gabe Reynolds feels his life is just starting—at forty-three. But what was supposed to be exciting and wonderful has been nothing but disappointing. The man he’s loved since they were teens broke his heart—again. Gabe has no clue how to meet men who are looking for more than one night, much less date them. Add to that his job as a mental health counselor, helping to keep his mentally ill ex-wife stable, and caring for children that belong to another man, and he has little time to look for Mr. Right.

Just as Gabe is giving up, Brandt Sawyer, with his hard body and gorgeous eyes, crashes into Gabe’s life. Brandt pushes all Gabe’s buttons—though he could do without the younger man’s know-it-all attitude. Gabe never thought he could be so torn between wanting to punch a man and wanting to kiss him. Yet, as he gets to know Brandt, Gabe sees past the military-programmed ex-soldier and catches a glimpse of what could be his happily ever after.

But with a troubled ex and young children involved, Gabe can’t just walk away from his past. Guilt is tearing him in every direction—maybe even away from the man he’s falling in love with.

When I started the book, I really liked it. I’m not saying that the end is bad, but probably because of the first pages, my expectations, regarding Gabe’s character, was a bit different.

That said the book is an easy read, no angst what so ever.

Gabe Reynolds is a middle-aged counselor. He is highly romantic and searching the One. After married to a woman for 23 years, finally, he is ready to move forward, but that moving is not as he expected. He is facing the cruel hook-up , no promises, gay world (well that is as accurate as it could be). After several disappointments, he is giving up on finding the one. But as we all know, my dear readers, that when we don’t expect it, is when things really happen. Mr. Reynolds isn’t an exception from this universal rule either.
When one unfortunate occasion brings him in his patient school, Gabe meets Brandt –Brandt meet Gabe – the school substitute teacher. Gabe finds himself hating and lusting for this man. Hot and cold would be a genuine discription of Gabe’s state.

Brandt is a military trained, now, subtitute teacher. He treats his students like recruits, and that, apparently doesn’t go well in the opinion of a feisty counselor named Gabe Reynolds.

But, as another universal law, we can’t escape our fate.

This two face situations life brings to them, like a mentally ill ex-wife, secrets of the past, first loves and so on …

If you are searching for an easy sweet read, click the button above and go purchase the book!