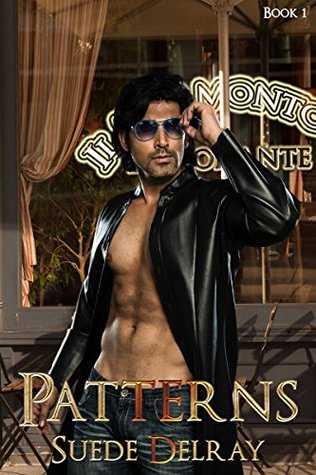 Ever since he’d met Dominick Cortez unexpectedly on the subway, Rob had been gripped by powerful memories. The intense feelings of desire he felt as soon as Dominick spoke his name, had taken him completely by surprise. He was perplexed. After all, he’d moved on, hadn’t he?

A homicide detective, Dominick’s marriage to his job had saved him, helping him to leave his feelings for Rob in the past. Or so he’d thought. Then he ran into Rob on his way to work. But ever since their impromptu meeting, Dominick couldn’t stop thinking about the past. Then a suspect in a murder investigation leads Dominick to the Martindale Institute, the very place Rob Dewhurst works.

This is the first book I have read by new-to-me author Suede Delray. I think it helps that the first book you read by a new author is also the first of a series or stand-alone, as it really gives you a feel for their writing style and storytelling, and what to expect for future releases. In this case, there were some things I really enjoyed, and some things that slightly irked me, but I’ll get to that soon enough.

The story centres around the two main characters, Rob Dewhurst and Dominick Cortez. Rob is the recently promoted assistant director of the Martindale Youth Detention Centre, he lives with Kyle his boyfriend of seven years. Dominick is a detective with the local Police force, he’s single and isn’t interested in being in a relationship. Rob and Dominick have a history together, and its big. They first met around 13 years earlier when Rob was working as a dancer/prostitute at a club called Mirror Palace, which was owned by Dominick’s uncle and Rob’s boss/pimp, Danny. Rob was a homeless teen, selling himself on the streets when Danny found him and took him in. He offered Rob food to eat and a place to stay, Rob earned his keep by sleeping with the men Danny set up for him. Dominick comes from a powerful Italian mafia family, but when his father found out he was gay, Dominick was cast out. He then became a police officer as he didn’t want to follow in the family footsteps. To his father, this was the ultimate betrayal, and they didn’t speak again. When another crime family began making moves to take over the family territory, Dominick went to his uncle’s club to try and talk him into getting word to his father to get the women and children in the family out of town to safety. He first noticed Rob dancing on a platform next to the bar in the club, and as he moved to go to the the stairs to get to his uncle’s office, they accidentally collided. This was the moment that changed everything for both men. From there, they became closer and started a relationship. Rob went to college with Dominick’s support and got the job at the detention centre, but then there was a big fight, where things were said, and which left both men with broken hearts. Rob and Dominick had not seen each other in 12 years when another accidental meeting brings them together again and into each other lives. Both men soon discover that the feelings from 12 years ago are still as strong as they were, and maybe together was how they were meant to be, and this was just another little push in the right direction by fate.

So, on to my thoughts. I really liked the plot of the story, I found it really interesting and entertaining, and I read the book through in one sitting because I was excited to see what was going to happen next. I liked how the author integrated the other characters and showed us Rob and Dominick’s back story, while still keeping a nice flow to the book. Now for the little things that let the book down a little. This may just be an issue of mine because I am very picky and notice things that a lot of people would probably let go, but to me, they stick and I just can’t seem to forget them once they’ve been seen. The first issue was that when Rob and Dominick meet in the club, we are told it was 2004, and a Lady GaGa song was playing when Dominick walked in. I may be wrong, but I’m sure Lady GaGa wasn’t around at this time, and it was a few more years before she was well known enough to have her songs played in clubs. Also, when Dominick’s detective partner Betty is discussing how he knows Rob, she asks if it was the same Rob from the club massacre in 2005, when again we’ve already been told it happened in 2004. There were also a couple of minor spelling mistakes, but these weren’t really much of an issue as the factual errors.

Overall, I did enjoy the book even with the little bugbear’s, and I’m looking forward to reading the other books in the series because the characters and story have caught my attention and peaked my interest, and I feel like I need to follow their journey to see what adventure the next part of their lives takes me on.

I will warn you though that there are multiple occasions when cheating either takes place or is mentioned, so if this is something that is a no go area for you, then it may best best to give this book a miss.