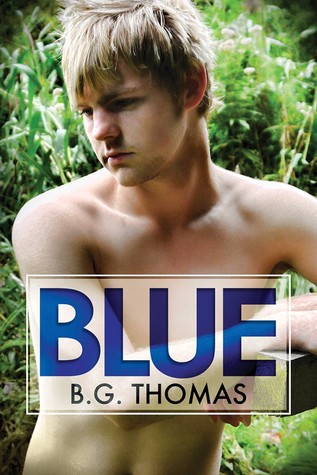 Blue McCoy has lived on the streets for a long time, surviving by his wits and doing what he must, and he’s not above using his youthful appearance and air of innocence to his advantage. It’s not an easy life, but he’s happy. He has everything he really needs: the clothes on his back, a house to squat in, a sweet dog. Everything except that special someone to love him.

Six months ago, John Williams’s wife left him because she was bored. “Even your *name* is boring” were her last words to him before she walked out. Now he’s by himself in a big house, trying to figure out what direction his life should take. He’s never been so alone.

A chance encounter sets John on a new path, a path that becomes clearer when loneliness sends him to a local animal shelter to get a dog—and he finds an angel instead. An angel named Blue. A crisis brings them together, but it is something else that keeps them there. Could it be love? A love that can forever end two men’s deep loneliness and bring them the support and sense of belonging they’ve searched for all their lives?

Reading the blurb, I was excited about this book because it sounded really interesting and definitely showed a lot of promise, but for me, it just didn’t hit the mark or fulfill the potential I thought it could’ve had. Although the plot and characters were quite sweet, I felt that they needed more depth, because even at 240 pages long, the story just felt as though it was lacking in some way. I wouldn’t say that I disliked it, it just wasn’t one of my favourites.

Blue is 23 years-old, and lives in an abandoned shack of a house with no heat or electricity. He shares the house with three friends, who are also his occasional sexual partners, and his recently acquired stray Labradoodle that he named Chewie. Blue essentially has nothing and no one. He works various odd-jobs to get money to live and eat, but they are never permanent. And on occasion, when he’s been really struggling for money and hungry, he’s resorted to sleeping with strangers for a meal, or a place to stay for the night. No matter what life throws at him, Blue nearly always sees the positive side, and is mostly a happy guy. But he has a brain that works at a million miles a minute, so people often find him to be a little weird, which normally makes it hard to form a special connection to someone. So he’s resigned himself to the fact that it’ll probably just be him and his dog alone in the world. Then one day disaster strikes, and Blue has to rush Chewie to the animal shelter to see the vet after he’s knocked down by a car.

John is the President of a bank. He’s always been attracted to men, but pushed it to the back of his mind, and was basically in denial. As far as he’s concerned he loved his wife and was happy with her, the sex may not have been earth-shattering, but he was never tempted to look elsewhere. At 45 years-old, he’s suddenly alone after his wife leaves him to travel and have a bit of adventure and excitement in her life. John’s feeling kind of lost, he was so used to doing things with his wife, that he doesn’t know how to fill his time now, she even took their dog when she left him. John decides he needs to fill the emptiness of his house so goes to the local animal shelter to get a new dog. This is where he meets Blue for the second time. A few months previously, he encountered Blue when he almost hit him with his car, and he found that in the time that passed since that day, he hasn’t been able to stop thinking about the young man. When he enters the animal shelter, he sees a young man in the waiting area visibly upset and shaken. When John goes over to make sure he’s ok, he’s surprised to find that the man is the person who has been filling his thoughts and dreams, and who has been making him question everything he thought about himself and his relationships. From this point, the two men come together to nurse Chewie back to health and explore what it means to have happiness, acceptance, understanding and love.

For me, the writing style was too chaotic. I felt as though it was a little disjointed, and I had to really concentrate on what I was reading, or I’d get a bit lost. Characters were introduced, and I thought they would have been expanded upon, but then they were never really involved again which did disappoint me. The story just didn’t flow as well as it could have, especially when switching between POV’s. Also, there was quite a lot of brand and name dropping that made it feel like it was some sort of advertisement. These issues are what affected my enjoyment of the book. I liked John and Blue, they were really loveable characters with personalities that made you want to get to know them more, I just wish I was able to feel more of a connection to them through this story.

So overall, this book didn’t exactly push my buttons, but that may just be personal preference, there’s nothing to say that you won’t love this story. It’s the first book I’ve read by this author, but it won’t put me off reading other titles.