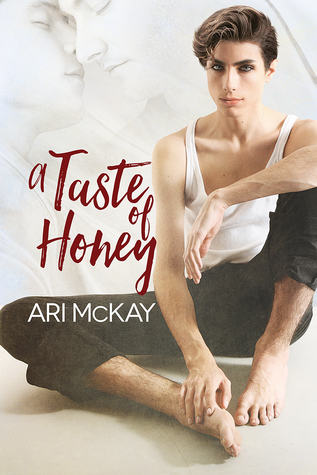 Boone Phillips needs a girlfriend-now! If he shows up to the family reunion alone, his mother will throw every woman in sight at him. But the only “woman” Boone trusts enough to ask is Honey, the drag queen alter ego of his best friend, Rob. It’s a crazy idea, but Boone is desperate.

Boone wins Rob over to the idea after first going on a “date” with him as Honey, but everything feels different once the plan is set in motion. Between nosy relatives, illegal moonshine, and the sight of Rob in white lace panties, Boone starts to wonder if he’s as straight as he thought. When an earth-shattering kiss sends Rob running, however, Boone learns some surprising things about both his family and himself. Now he needs to convince Rob to give him another chance, or his first taste of Honey might also be his last.

This is my first time reading a book by Ari McKay, but I was hooked by the blurb, and I have found that I really enjoy reading cross-dressing and drag queen books, so I am glad that I gave A Taste of Honey a chance because it was a delightful story. The story was well written and had a great flow to it. The characters have been fleshed out and developed, and I loved the supporting characters also.

I liked that Rob/Honey and Boone are opposites in both looks and temperament and I liked this line in the book. “Boone was drawn to Rob’s energy and spontaneity, while Rob seemed to like Boone’s solid and unwavering dependability.” It described them perfectly.

Boone has a family reunion that he is going to and his mom always tries to set him up with available girls while he’s there. When he complains to his best friend Rob during their weekly dinner out, Rob tells him that he should take a fake girlfriend with him. But Boone’s hesitant. Which of his ex-girlfriends would be able to hold up to his mom’s interrogation. Boone can only think of one person who could do it, and that would be his gay best friend’s drag queen alter ego Honey. Honey’s confident and can handle any situation. But can Boone get his best friend to agree to do it?

Rob’s had a crush on his best friend Boone since he first met him. But Boone’s straight and so he’s always kept it a secret. He’s hesitant to go with Boone to his reunion because he doesn’t want to jeopardize his friendship. And he agrees to go with Boone to the reunion but only if he will go on a public date with him as Honey and prove that he can handle playing the affectionate boyfriend. When he passes that with flying colors, it’s off to the reunion they go. At the reunion is where Honey/Rob finds the accepting, loving family that he’s always hoped for.

I loved Boone’s family and how they had that perfect southern charm down pat. They were so loving and accepting of Boone’s girlfriend, and I loved all of the little stories about Boone’s relatives and their sexuality that come out as they were drinking moonshine.

I would recommend A Taste of Honey to anybody looking for a quick feel good book about a straight best friend that realizes that he may not be as straight as he thought when he falls in love with his gay best friend.

I can’t wait to read more books by Ari McKay