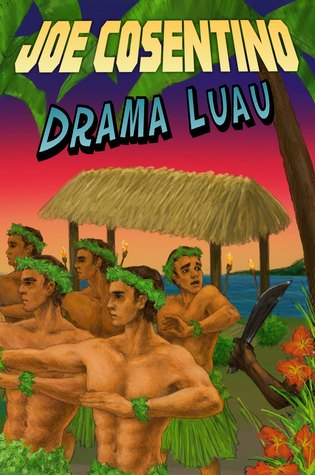 Theatre professors and spouses, Nicky Abbondanza and Noah Oliver, are on their honeymoon at a Hawaiian resort, where musclemen in grass skirts are keeling over like waterfalls. Things erupt faster than a volcano when Nicky and Noah, along with their best friends Martin and Ruben, try to stage a luau show. Nicky and Noah will need to use their drama skills to figure out who is bringing the grass curtain down on male hula dancers—before things go coconuts for the handsome couple. You will be applauding and shouting Bravo for Joe Cosentino’s fast-paced, side-splittingly funny, edge-of-your-seat entertaining fourth novel in this delightful series. Curtain up and aloha!

Boy, was this a fun read. To me, it was a combination of Laurel and Hardy mixed with Hitchcock and Murder She Wrote. So much so that it would make a great show. Loaded with puns and one-liners, I found myself enjoying it more than I expected. Also, it was obvious from the beginning that the author took the time to research not only the general location history but the beliefs as well.

Nicky and Noah are on their honeymoon. Since there were some financial cuts, the only way to afford a Hawaiian honeymoon was to make it a working one. The pair are put in charge of the resort’s luau production. But if you have read the other books in the series then you know that it never is as simple as that. On opening night, the drama starts. As the dancers go missing and the suspect list grows, Nicky and Noah, with the help of their friends Martin and Ruben, are on a quest to solve the mystery. All four with their dramatic flair try to unravel what’s really going on.

What I really liked was how the author kept you guessing. With so many suspects with many different reasons. Just when you think you know who, another reason pops up. Right to the end, you are kept guessing, and the conclusion still has a surprise in store for you. I have to say though, for me, Taavi was by far my favorite. Such a sweet, smart boy. Who wouldn’t want to have him for a son.

I would like to thank the author for the privilege and opportunity of reading this ARC. My review is an honest opinion of the book.

One thought on “Review: “Drama Luau” by Joe Cosentino”