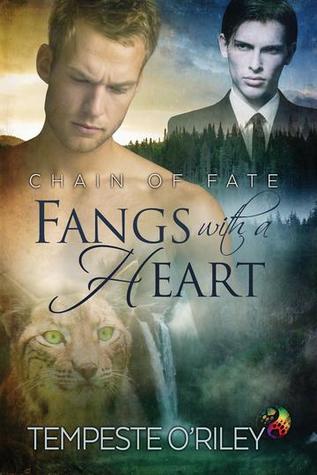 Lynx shifter Trace Wilson’s fun-loving exterior hides a heart scarred by severe domestic violence—a heart that might not ever trust another male, fated mate or not. When Trace moves to Seattle to take his place as trainer and council representative to the Glacier Rim Tribe, he discovers his mate is the vampire prince Sasha Tolstoi, leader of the Konstantin Coven. It’s not something Trace is ready to accept. Not now, maybe not ever. But if there’s one thing Sasha knows how to do, it’s how to be patient, especially when his fated heart is also his perfect sub.

When an outside force threatens the fragile bond slowly forming between them—and nearly kills Trace—Trace’s instincts shift into high gear. Sasha is powerful, and that means he has enemies, among them several rival covens and an uncle determined to force Sasha into a marriage with a vampire princess. But why involve the lynx Trace in their maneuvering? Finding the culprit won’t be easy, and it will mean building trust—a slow and difficult prospect for someone who’s suffered as much as Trace. Finding a way to move beyond the past, and to love, before those out to finish Sasha can destroy either, is a race the two fated hearts have to win.

Exactly what I needed!

Although my favorite shifters are the wolves, I can’t say that I disliked this book.

The MC’s are paranormal beings, one is a vampire prince the other is a Council member of the Lynx shifters.

If I had to choose between the two MCs I would choose Sasha, the vampire prince. In this world Tempeste created, the vampires have their own mate, but they call them fated heart. When he and Trace discovered that they are meant to be, they don’t act upon this.

Now, 5 years later, Sasha, the vampire prince, is forced to step up and take care of his fated heart. Trace’s life is in danger, Sasha has a lot of enemies, even in his own family. This task is not a hardship though, protecting Trace is all he ever wanted. Even though they avoided each other, both of them, Sasha must be honest with himself: he can’t think of anyone else but Trace.

Trace doesn’t want a mate. He already had one, an abusive one. Trace is a born sub, but since his bad experience, he doesn’t act upon it. Although he can’t have no one, except his vampire mate Sasha, he’s resolved that he will be alone for his entire life. Keith, his alpha, and Jason, the alpha’s human mate, tries to push him toward Sasha. It doesn’t help his situation that Sasha is Jason’s best friend. Then, when he’s almost killed by Sasha’s enemies, he wakes up in Sasha’s mansion, he can’t deny the need to submit to his mate anymore. He learns the sweet side of Sasha and step by step he seems, that maybe, he can submit…

The book is a sweet read. I highly recommend it to the shifter lovers, and it made me read the first book of the series.