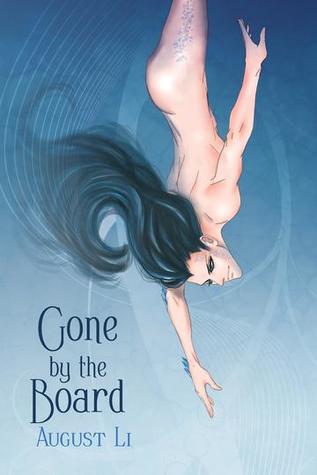 The sea is full of jealously guarded secrets, but everything washes up eventually….

Betrayed by a trusted partner, Nathan figures he might as well be lost and heartbroken in the sunshine, and he heads to the coast of South Carolina, to stay with a friend and find a new direction for his life. But despite his efforts, he is lost in the fog, unable to find a guiding light and sometimes unable to find a reason to go on. His only respite from depression and anxiety is the soothing rhythm of the tides and the comfort he draws from proximity to the water.

When the sea sends a lifeline in the form of a strange and beautiful man, it’s easy for Nathan to ignore all the things that don’t add up about his new friend. But the tides can turn without notice, and it’s those mystical traits that will either finally lead Nathan safely to shore or drown him in confusion and despair.

Gone by the Board by August Li was a book that made me feel but not always in a happy way. It has two scenes of attempted suicide so if this is a trigger for you as it is for me then I would probably pass on this book. I wish I had known about it because having lost a brother to suicide I would have passed on it also.

Nathan and Brume go through a lot of pain and heartache, feelings of despair, worthlessness, and loneliness both together and separately. It had me crying on more than one occasion. The book was well written, but it was a little heavy on the purple prose at the beginning for my taste, but it tapered off toward the middle, so that was good, either that or I finally got invested enough in the characters not to notice it anymore. The story was nicely edited and had a good flow to it. There wasn’t a lot of passion in this book. It was more like a PG movie. There was some hand holding and kissing but nothing graphic or lewd. However, the author did do a good job conveying the feelings that the main characters felt for each other. I do tend to judge a book by its cover and then the blurb, and so I was pleasantly surprised that the book wasn’t about mermen as I had figured it would be. I had never heard of the In-between People before, but I found them to be intriguing.

Nathan’s going on 40 and has been married to Brian for 15 years. However, Nathan’s been having problems that he doesn’t want to acknowledge or get help for. He’s afraid that people will judge him for his problems, so he does his best to hide them. And yes, I can understand that feeling. But it also ultimately costs him his marriage as Nathan’s social anxieties and bouts of depression make him want to stay home all of the time instead of going out with his extrovert husband. After finally taking a stand, Nathan packs all of his stuff and moves to be with his college friend Rachelle. Rachelle lives in the small village town of Garden City Beach about 20 minutes away from South Carolina’s Myrtle Beach. Nathan’s still not doing any better with his problems and continues to hide them. And I hate that Nathan’s silently crying for help and nobody notices or tries to help. Nathan’s first attempt wasn’t a planned decision. He just kept wandering out further and further into the ocean and liked how peaceful he felt and decided just to let go. He’s saved by Brume, an In-between Person whose job is to help guide lost people back to shore.

The In-between People only have a solid form after the sun goes down. When the sun is up, they’re drops of water and are part of the ocean, and all of their thoughts and feelings are one big consciousness. Brume has just lost his best friend that has been his companion for over a couple of hundred years. She has made the decision to no longer have a body after dark, so they will still have a connection during the day, but he will no longer have a companion after dark. And Brume’s feeling lost and alone, and it is perfect timing for him when he races to help Nathan who he can feel is lost. He manages to save Nathan and get him home, but he’s been told by his elders that humans can’t handle finding out what they are and so they generally observe from afar.

But Brume and Nathan fill a hole in each other and end up spending a lot of time together over the next couple of months. And Nathan finally starts getting the help he needs by going to a therapist. But a misunderstanding while at dinner will damage their relationship and send them both spinning back to feelings of depression and worthlessness. Will they be able to work out their misunderstanding or will it be too much for both of them?

I did like the ending of the story, but I wasn’t a fan of how they got there. This book unfortunately just kept triggering me, and so it just wasn’t for me.