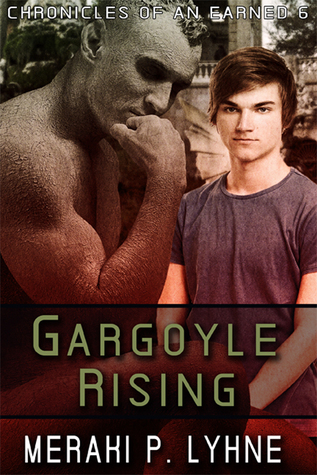 At age eleven, Meino buried his dad next to where they had buried his mom less than six months earlier. All alone in the world, he seeks out the Gargoyles and uses his dad’s spell book to bring one to life. But he doesn’t understand the magic he’s using, and he can’t finish the spell. For the next twelve years, his dreams are haunted by the lonely cries of the Gargoyle. As an adult, Meino tries the spell again to get rid of the nightmares. This time it works—but once the magic is alive, it attracts the attention of the New Knight Templars, who want to destroy the Gargoyle.

Nathan and Lucien have settled into a routine at the school where Nathan is studying to be able to help the Order. Just as life is calming down, it all takes a turn. News that a protégé is in danger and that Nathan’s beloved Professor Nigel Gershman has died is just the beginning. Once again, Nathan and Lucien are moved about to assist the Order, and new magic brings out a hidden enemy.

For all those who haven’t read the previous ones, you are missing out big time.

The series is not a typical romantic series, there is romance mind you, and hot gay sex too, but the main thing, or maybe it’s just for me, is the occult world.

I know that Meraki has invested 8 years of research into this series, but how much is fiction and how much are facts…well, I think Meraki’s keeping us guessing.

During this series, we meet a lot of paranormal beings. The main entities, as we can learn from series title, are Earned. An Earned is a demigod who was created to serve mankind. Although in this book they are not so much involved.

In “Gargoyle Rising”, we will meet Nathan and his shadow Lucien again. We will find out that Nathan makes progress to find out about the curse that bounds Lucien into the shadow. The book happens in parallel with the previous books of the series. It was nice experiencing it again.

In the previous books, we’ve met Rebecca a girl who was hitting on Alex, we knew almost nothing about her, but now…she is working for the New Knight Templars. Man, the brainwashing! Meraki did an extremely nice job describing how the religious fanaticism makes you blind to the reality.

But the book is mostly about Meino. He is an auto mechanic, living in Germany. When he was 11, he lost both his parents, but he can’t forget the gargoyles from a crypt where his father used to bring him to play. After the loss of his father, Meino finds a book and tries to resurrect a gargoyle so he’s not alone anymore. Well, nothing happens. But the gargoyle haunts his dreams, and after 15 years when Meino finds the missing piece of the spell, Buckheart the Gargoyle shows up on his balcony. And then when their story starts…

We will learn more about Templars and hidden societies in Europe. Although the book is a fiction, I got the feeling that Meraki let us in, into knowledge about the occult societies. To believe it or not it’s all up to you …