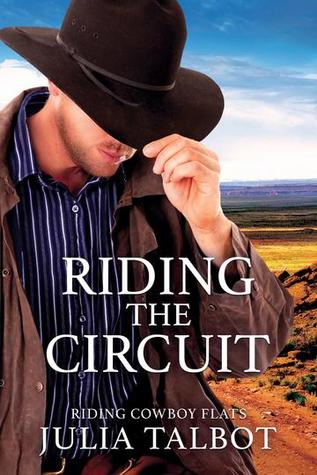 Rodeo cowboy Frost Barton spends most of his time on tour, and that’s the way he likes it. But when his dad dies suddenly, Frost returns to southern New Mexico to attend the funeral and help his mom decide what to do with their small family ranch. Frost is already considering retiring from bull riding and planting his itchy feet in the ground. Meeting horse trainer Matt Morales just adds another pull in that direction, though Frost still isn’t sure he’s ready to give up the circuit—even if Matt makes settling down look mighty tempting.

Matt is old enough to know better, but he falls for Frost anyway. They only have so much time to spend together before Frost goes back on tour, but Matt believes they might have something special. He keeps the home fires burning while Frost earns his living, but Matt hopes he can convince Frost to come home—to stay.

Riding the Circuit by Julia Talbot is the third book in the Riding Cowboy Flats series. This is a great cowboy book. It was short enough to read in one sitting and held my attention from the first page to the last. The book was well written and nicely edited. The dialogue between the characters was witty and had me smiling and laughing on more than one occasion and had some very spicy scenes too.

Frost Barton’s a professional bull rider. A profession that isn’t supported by his hometown or the fact that he’s gay. He takes a lot of ribbing from the old timers and some of the bolder bullies. So he’s stayed away from home as a result. But he’s forced back to his family home to take care of his mom and the family ranch. But he’s going to have to deal with some feelings of worthlessness and frustration over the fact that his mother didn’t tell him that his father was sick so that he could make amends.
Matt Morales’ a horse trainer who had been hired by Frost’s dad to take care of the ranch when he got sick. He’s there to be a friend and confidant to Frost and help him figure out what he should do with his life and the ranch. He’s also great at tempering Frost’s hot-headedness.

I loved the chemistry between Matt and Frost. I also loved that the men were older more experienced men which’s a nice change from a lot of western books. I also liked that Matt being older than Frost had already gone through having to come home to take over the family ranch and caring for the remaining parent and so he was able to help Frost with sorting out his own family crisis. He’s also there to help support his decision to finish out his bull riding circuit and watch over his mom and the ranch.
Riding the Circuit’s a standalone book. You don’t have to read the other two books in the series to understand and enjoy what’s happening in this book. However, the other two books main characters are friends of Frost and Matt, and they do make cameos in this book, so reading the other two books could only enhance your reading experience.

That being said, I can’t wait to go back and read the first two books in the series and see how Tate and Dave from Jackass Flats and Herschel and Dalton from Just a Cowboy meet and fall in love.