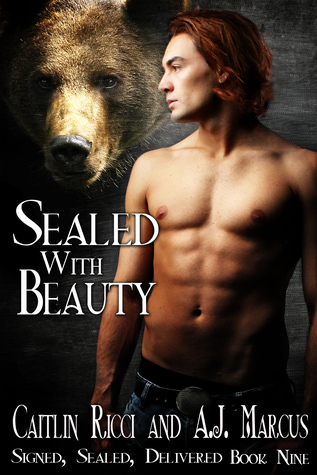 Can beauty tame this wild beast?

To his family, Elan is something precious and beautiful to be secreted away and protected at all costs. He’s never allowed to be alone and his only hope of freedom is when his parents decide to mate him off. He’s felt like a prisoner for years, and he’s sick of it. He’s a hawk, and he just wants to fly away.

Raja was badly burned in a magical fire, and his scars have left him feeling like a monster. He lives a life of isolation, only interrupted by his father’s insistence that he get out and explore the world and stop letting his physical appearance limit him. At his wit’s end, his father decides to mate him to Elan, a man Raja could never hope to attract the attention of on his own.

Elan wants his freedom, and Raja only wants to be left alone. It should be a simple arrangement where they both get exactly what they want, only falling in love is never so easy, especially when it comes to a beauty and a beast.

Sealed with Beauty’s a cute Beauty and the Beast adaptation. There’s just something special about reading a book where a character with a heart of gold ends up helping a tormented and troubled soul find his way back to the light and happiness that just gives me warm and fuzzy feelings and this book gave me those feelings. My only complaint was that I didn’t want it to end. It’s unfortunately only a short story.

Raja, a bear shifter, has become reclusive after being burned by magic fire and sustaining scars over a lot of his body. He can’t stand for anybody to see how monstrous he’s become and so he covers as much of his body as he can if he’s going to be around anybody including his family.

Elan, a hawk shifter, has a huge overly protective family that will do anything to keep his purity intact before he is mated. Elan’s tired of constantly being watched and told what he can and can’t do. Elan’s tired of being stifled and can’t wait to be mated so he can have some freedom.

Not wanting his son to be lonely anymore, Raja’s father arranges a mating for him so that when he dies his son will have somebody to share his life with. However, Raja has other ideas for after he’s married and has no intentions of interacting with his new mate and wants a marriage in name only after the marriage is consummated. Elan has just as many ideas for his new mated life, and it includes having a partner, lover and best friend.
I loved the interactions between Raja and Elan when they first meet and after they are mated. I loved when Elan nicknamed Raja “Grumpy butt” and how he stood up for himself and refused to be bullied and refused to have a mate that wouldn’t interact and do things with him.

The storyline and plot were great, and so was the editing, but I would have liked the story to be longer. I wanted to read more about Raja and Elan after they were mated, like when they went out for the first time as a couple without Raja being completely covered up and stuff like that. I wanted to see how they developed as a couple and see how Raja blossomed into a confident guy again with Elan’s help.