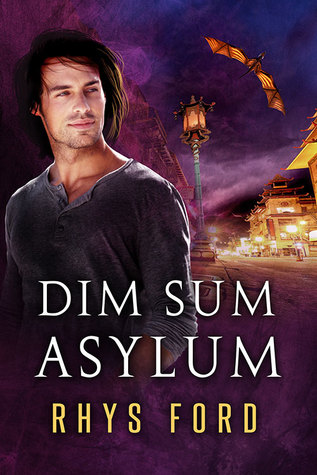 Welcome to Dim Sum Asylum: a San Francisco where it’s a ho-hum kind of case when a cop has to chase down an enchanted two-foot-tall shrine god statue with an impressive Fu Manchu mustache that’s running around Chinatown, trolling sex magic and chaos in its wake.
Senior Inspector Roku MacCormick of the Chinatown Arcane Crimes Division faces a pile of challenges far beyond his human-faerie heritage, snarling dragons guarding C-Town’s multiple gates, and exploding noodle factories. After a case goes sideways, Roku is saddled with Trent Leonard, a new partner he can’t trust, to add to the crime syndicate family he doesn’t want and a spell-casting serial killer he desperately needs to find.

While Roku would rather stay home with Bob the Cat and whiskey himself to sleep, he puts on his badge and gun every day, determined to serve and protect the city he loves. When Chinatown’s dark mystical underworld makes his life hell and the case turns deadly, Trent guards Roku’s back and, if Trent can be believed, his heart… even if from what Roku can see, Trent is as dangerous as the monsters and criminals they’re sworn to bring down.

When I started Rhys’s books, I always need like 60 pages to get in the right mindset to read her stories. Her style is unusual, and me not being a native English, I struggle a bit about the author’s poetic metaphors.
That said, I must be honest, I spent a lot of time researching on Google for this story, in order to know what certain terms meant.

The story takes place in San Francisco’s Chinatown, where Roku is an investigator. Roku’s mother was a fairy (well it’s not clear, but I suppose) and his father was the son of the head of the China Mob in San Francisco. This book has a lot of Chinese/Japanese/Korean terms. It wasn’t an easy read, half of the time I spent on Google. For all those who have more knowledge about China/Japanese culture, maybe wouldn’t be as difficult as it was for me.

This is a slow read for all those who are not familiar with those terms, but at the same time, Rhys’s sweet way of telling it makes you keep reading the book.

As I said, Roku is an investigator, and after he’s forced to shot his partner, he gets another one. Insta-desire is an understatement. Trent is an ex-solider, who was working for a secret-not-so-secret organization. Trent is tall, and muscle-built, dark-blonde, very Nordic. But Roku knows that acting on this desire is wrong.

The story is a fantasy, with fairies who are not always good. They’re either pushed by sexual desire or the desire to kill. We’ll have the chance to navigate in this mythical world oh Rhys’s. There will be Gods, and temples also will see the ins-and-outs of the low-life of Asylum.

Rhys has this cunning way of inserting romance in the middle of an angst scene. And by romance I mean lyric. I have no other world to subscribe her…lyrical…

I suggest this book to those readers who have knowledge about Chinese and Japanese mysticism.