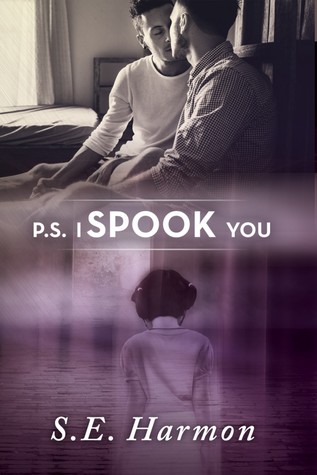 SSA Rain Christiansen used to be the agency’s golden boy. It just takes one moment of weakness, one slight, tiny, itty-bitty paranormal sighting, and all of a sudden he’s the agency’s embarrassment. His boss gives him one last chance to redeem himself—go down to Brickell Bay, play nice with the local police, and leave the ghost sightings behind. Rain is determined to do exactly that, even if it kills him.

Cold-case detective Daniel McKenna’s latest investigation is going nowhere fast. Five years earlier, high school student Amy Greene went missing after leaving her part-time job and was never seen again. Daniel is glad to finally have the FBI help that his department requested, even if it does come in the form of his ex.

It doesn’t help that Rain is pretty sure he’s falling in love with Danny all over again—if he ever stopped. Add to that the frustration of seeing ghosts at every turn while he works a case that’s stalled in its tracks, and Rain is starting to wonder if second chances and happy endings are just for fairy tales.

Rain is profiler with the FBI. He is also a Medium even if he doesn’t want it. One day, during an investigation of a missing girl, he talks to the victim’s parents, telling them that their daughter was dead and in peace. Of course, the news wasn’t welcomed well, and Rain was suspended.

After a leave of 2 months, Rain can’t reintegrate back into his team. So, he’s sent to Brickell Bay (his hometown) to help the Cold Case unit working on a case of a missing girl with his ex-boyfriend Detective Danny McKenna.

I loved this book, the plot, the writing, the characters, everything was great.

I love Rain, he’s smart, honest, speaks bluntly, full of sass with a great sense of humor. He struggled at first with his ability to speak to the ghosts/spirit. He rejected it, convinced that it wasn’t real. But when he finally understood and accepted it, he didn’t back, he stayed with his head high even when people called him crazy, he stayed proud and refused to hide his ability or himself. I loved this about him.

He’s also completely in love with Danny, even if he knows that it wouldn’t be easy to get back with him, Rain doesn’t give up, and try his best to be back with the man he loves.
Danny is hot (tall, muscles, tattooed and pierced…my type of man), and intense. He’s calm, patient, easy going while Rain is just like a storm, a big storm (His name Rainstorm fits perfectly actually) everywhere he goes. They fit perfectly together, even if Danny is afraid to be back with Rain again, to have his heart broken again, he can’t stay away from him.
The plot was good too, the investigation about a cold case with ghosts to disturb all of this, I liked it a lot.

Oh I hear you, “come on Ivy, nothing original in this” … Yes, maybe, but you know what isn’t original too?? Lasagna. Nothing original with lasagna, but some are bad, other are super good, what makes the difference between two dishes of lasagna? … The cook.
That’s exactly the same thing here, S.E Harmon takes something common in literature and adds just her talent in this. And the result is good. We have a super story with a lot of humor and little winks to our culture (movies, songs…)

It was a mix between Criminal Minds, Cold Case and Ghost Whisperer. Add two hot gay men and steamy hot scene sex between them. Very hot. And you’ve got “P. S I Spook you”
For me, it was a great time, in my sunbathe with a cold drink reading Rain and Danny’s story.