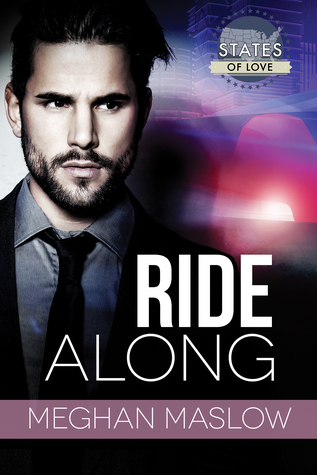 Drew Nolan is a loud-and-proud mystery writer with a brutal case of writer’s block. He needs practical experience with the Baltimore police beat to get his latest manuscript to his publisher on time. When he wins a ride-along at a writer’s conference, he thinks he’s hit the jackpot… until he meets his partner.

Closeted cop Josh de Oliveira lost his family, his partner, and the respect of his unit—all for doing the right thing. Recently busted back down to patrol, he’s relieved to get a cushy assignment at the Author’s Police Institute where he’ll take one lucky writer on a ride-along. Unfortunately, his author looks like he belongs in the backseat of Josh’s squad car—long, ginger dreadlocks, piercings, and an “I would bottom you so hard” T-shirt. But there’s something about Drew Josh is having a hard time resisting.

It’s going to be a long night and one hell of a ride as opposites attract and realize they share a lot in common beneath the surface. As animosity becomes desire, they realize they can help each other out—in more ways than one.

Drew Nolan, a young writer, is at a convention in Baltimore trying to get answers for his
next book when he meets Officer Josh De Oliveira, a handsome but rude and probably
homophobe (as Drew thinks).

Josh has no choice but to be at the convention, answering questions after questions to author or
wannabe author. The last thing he expected is to meet the hot young author Drew Nolan.
Josh can’t help but be rude to him, and when he has a ride along with him, Josh prays to
survive the day.

Drew is funny, smart and not afraid to say out loud what he wants.
Josh is more reserved, he struggles to express out loud his feelings or worries.
We follow them during the first months, how they meet together and how they evolve from
single to a couple.

They are adorable together, Drew especially, I love how he stays proud of himself when he
thought that Josh was a homophobe, how he doesn’t hesitate to fight for Josh when it’s
necessary and how he supported Josh when he struggled with his work and his life.

I love how Josh isn’t afraid to admit when he’s wrong with Drew, how he doesn’t hesitate to
try to be more affectionate with him in public even if he’s in the closet at work, how he
supported Drew with his writing or when his family makes him feel bad.

It was a sweet novella and a sweet love story between Drew and Josh.
The writing was good, and all my reading was enjoyable.

It’s the kind of book you can read on the beach or when you travel. It makes the time pass more pleasantly and quickly.
I spent a lazy Sunday afternoon with them, and I’ve no regrets at all.