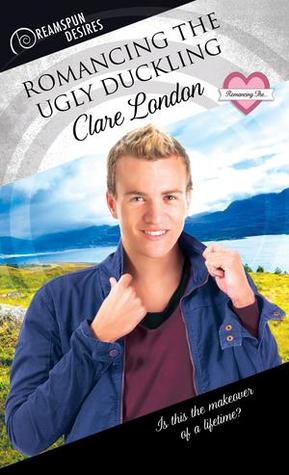 Is this the makeover of a lifetime?

Ambitious fashionista Perry Goodwood lands the project of his dreams—track down a celebrity family’s missing brother in the Scottish Highlands and bring him back to London for a TV reality show. But first he must transform the rugged loner into a glamorous sophisticate.

Greg Ventura has no use for high fashion. He lives on the isolated island of North Uist to escape the reminder that he’s nowhere near as handsome as his gorgeous brothers and avoid the painful childhood memories of being bullied.

Greg wants nothing to do with city life, and Perry’s never been outside London. When Perry is stranded on North Uist, this conflict seems insurmountable. But Greg is captivated by the vivacious Perry, and Perry by both the island and his host. However, Perry’s one heartfelt wish remains: that ugly duckling Greg fulfill his potential as a swan.

Romancing the Ugly Duckling is the second book in the Romancing the… series by Clare London. I enjoy the way that Ms. London writes. She has a way of making me feel what the characters are feeling. I found myself chuckling at some of the things the characters were saying and thinking and I love when a book can make me chuckle. I also loved all of the little plot twists, some that I saw coming and others that I didn’t. The book was well written and nicely edited, and it had a great flow to it. I found it very hard to down. My only issue with this story is that while it ended with a happy ending, it was kind of abrupt, and I would have enjoyed an epilogue to see how their relationship progressed.

I always enjoyed reading the story of the ugly duckling when I was a child, and so, I was excited to read this adult retelling. And I thought it was a great retelling.

I found Peregrine, aka Perry, to be a delightful, flamboyant fashionista. Perry is known for working miracles at the Latham Agency in London. His latest assignment is to convince an estranged brother to come back to London for a TV reality show audition with his brothers. The fun part will be getting him to agree to a makeover so that he looks like his sophisticated and famous brothers. What Perry doesn’t know is why the brothers are estranged and that’s only going to make his job harder.

I found Greg Ventura to be a complex character. He starts out being rude, direct, and inhospitable, but the more time he spends with Perry the more open and friendly he becomes. Greg left home shortly after received his share of his grandmother’s inheritance to get away from all of the bulling that he received from his brothers. Greg was always different from his brothers growing up. He was quiet and a loner and didn’t have his brother’s good looks and he was teased because of his differences. He moved to the outskirts of Lockmaddy, the largest town on North Uist, Scotland. Where he enjoys living with his dog, Roy, working various jobs, and socializing with a small group of friends.

I enjoyed how Greg and Perry bring out the best in each other and how Perry challenges Greg to confront his past instead of hiding from it. Greg and Perry had great chemistry together and some pretty hot scenes together. They were truly delightful together.

I can’t wait to read my next book by Clare London. I wonder which of her books I should read next…