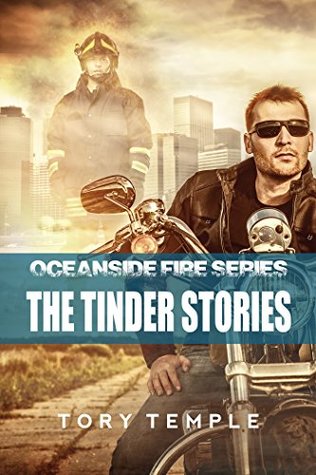 Return to Oceanside Fire, where the sizzling passion between men scorches everything they touch—especially each other. For firefighter Chris Matthews and instructor Morgan Daniels, it’s dislike at first sight—but that doesn’t mean there’s any relief from the heat building between them, and it only takes a spark to set the tinder ablaze.

Will Chris and Morgan go from enemies to lovers, or will they remain enemies with healthy libidos who stoke each other’s flames? Morgan is no fan of firefighters in general, and he finds Chris especially grating. But when they’re together, the sexual tension is thick enough to cut with a knife—and there’s only one way to work it off. A battle of wills is sure to follow. Add in an age difference, and finding common ground will be an uphill battle. Even if they succeed in building a relationship, secrets and suspicion could reduce everything to ash.

Although this is an anthology of three books, I will review it as one.

For me, this was a really fast read. Why? Because it was super awesome…

Chris is a firefighter. He likes his job very much, but in order to maintain it, they have to do additional yearly courses to be updated about the risks they may face during an intervention.

Morgan teaches the firefighters course on sexual harassment, and the cocky attitude of Chris rubs him in a wrong way. He assigns Chris a homework assignment about the statistics on sexual harassment at workplace. Well, although Chris is very gathered and precise, he forgets his homework at home…but instead of being punished, after he let Morgan know about his opinion, Morgan seems to give him another chance. When Chris asked Morgan what’s his problem with Chris was, Morgan simple answer was “I hate firefighters.”

After the course is over, Chris hopes that he’ll never meet Morgan again, though he was aware of the strange connection between the two. Chris also likes to ride his motorcycle. When he meets up with his motorbike gang, he’s mortified to see that the new member is no one else than the unsupportable Morgan.

Morgan is the real jerk, in my honest opinion, and his behavior is not changing during the books. I found it difficult to believe how Chris is putting up with this man, but he falls for him. Morgan feels the same way, but he is more introverted. There is also an age gap between the two and Morgan very often treats Chris as a child even though Chris is in his thirties.

This three-book anthology guides us through their coming together. I liked it very much, even though I wanted to punch Morgan on his face. He has a reason why he behaves like he does, but the dude needs to learn how to let the past be the past. In my opinion, Chris is a saint, I wouldn’t have that much patience with Morgan…that said I think I’m more like Morgan and that is not a good thing…well, I need a “Chris” in my life…

My rating is an honest 4.5 OptimuMM!