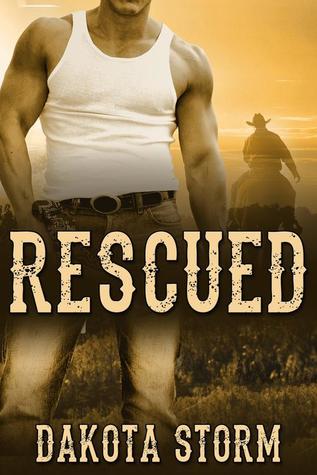 Dean Montgomery loves his ranch and his family, but something is missing. When he sets out on a road trip to purchase land to expand his ranch, he finds himself stranded in a snowstorm.

When the sexy and gruff Colt James, a tracker and rescue worker, rescues Dean, both of their lives are turned upside down. Attraction sizzles, and hearts race. But then trouble brews, and Dean is needed back home. Can these two make their new relationship work?

I really enjoyed Rescued by Dakota Storm. I was entertained from the first word to the last. The characters were engaging and intriguing, and I loved how Colt interacted with his nephew Coop. I also loved how Dean interacted with Colt and Coop while waiting out the storm. It wasn’t an instant love type of feel but more like they had known each other forever kind of feel. The story’s well written and nicely edited, and I couldn’t get enough of these characters.

Dean and his brother, Randy, and Randy’s family have a ranch in Hot Springs. They train horses and raise beef and dairy cattle. Their deadbeat dad ended up leaving them at their grandparents one summer when they were visiting them. So their grandparents ended up raising them. As they grew up, they worked hard to make the ranch the success that it is today. But Dean’s restless and would like to work more hands on with the ranch like when he was growing up instead of the supervisor role that he has today. So he jumps at the chance to go and look at a piece of land that they have had their eye on when the price is reduced. However, on his way back home, his truck ends up breaking down and leaves him stranded 5 miles outside of Laramie in the middle of a blizzard that has already left a foot of snow on the ground. Dean’s choices are to stay and freeze in his truck on a back country road or try to walk back to Laramie in the snow. Dean opts for the walk, but he doesn’t make it.

Colt and Coop are making their way home from town when Colt sees a guy sitting on a tree stump on the side of the road. Colt rescues Dean and gets him back to his rustic cabin in the backwoods of Wyoming where they wait out the storm.
Colt’s a handyman, ex-military, and the best tracker in the area. He’s also the guardian to his nephew after his ornery drunk bastard of a brother, Travis, died. Travis didn’t want his son to be raised by his ornery drunk bastard of a father. Colt’s done a wonderful job raising Coop into a bright young thirteen-year-old. Although Coop’s very wise beyond his years, he does tend to run his uncle ragged as only a horny teenager can. And I laughed at some of the situations that Coop gets caught in.

I enjoyed getting to see Colt put his search and rescue and tracking skills to good use a couple of times in this book. The situations that arise and the addition of a teenager in the house makes for a slow burn romance between Colt and Dean, but that doesn’t mean that there aren’t any hot scenes because there are plenty. Colt and Dean may have both come from messed up parents, but that didn’t stop them from being good people and making family an important part of their lives.

One thought on “Review: “Rescued” by Dakota Storm”