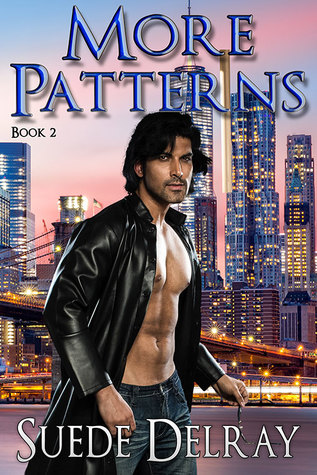 More Patterns is book two of the Patterns series, but it can be read as a stand-alone. It does involve characters and situations from book one, but we are given some background, so you are easily able to catch up without feeling confused.

Rob and Dominick have now been married for six months, and are enjoying their lives as newlyweds. Dominick answers a call to a crime scene where a family, including two small children, have been brutally murdered, and the killer has left a message written in blood on the wall. Dominick is tasked with leading the team to investigate the murder but is finding more questions than answers, no matter which way he turns. This is taking him away from home and Rob for longer than he would like. It causes some friction between the two men, and Dominick can’t seem to do right for doing wrong. Dealing with the high profile case, his personal problems and a closeted member of the team, who is often aggressively homophobic towards Dominick—even though they previously had a little drunken liaison at an office party—is giving him more problems and stress than he needs.

Rob’s feeling a little bit lonely and neglected. He spends most evenings at home alone, and although he accepts that it’s part of Dominick’s job, he didn’t think that they’d be apart as much as they have, especially this early into their marriage. When the detention centre gets a new teen, Gavin, who likes to cause trouble, Rob believes it’s a result of the hard life he’s had. But then Gavin says some things to Rob about Dominick that really gets under his skin, and he finds it hard to keep his cool around the boy. Gavin is also telling all the other kids in the centre about Dominick, so Rob is feeling like everyone is talking about him and his authority is being undermined.

By the time Rob gets home, his mood has taken a turn for the worse, and when Dominick finally arrives, he confronts him about the things that Gavin had said. Dominick is shocked that Rob would even think he would be involved with a child and tells Rob that he will go to the detention centre and speak to Gavin to find out what’s going on.

When the two men speak to Gavin, he tells them that he knows Dominick because of who his family is, and the BDSM club he worked at was run by some of the mobsters that worked for Dominick’s father. He then tells them that he’d seen Dominick’s picture before because there’s been a hit put out on Dominick by his father because he got him sent to prison. This leaves Dominick trying to salvage his relationship and marriage, solve a murder, and also trying to keep himself safe for the sake of his sister and Rob. But as it normally is with life, there’s more than a few difficulties along the way, the question is, will they be able to come out the other side unscathed?

This was a really good follow-up to the first book. There was still the excitement, drama and intrigue, but it also showed that even two people who are very much in love don’t always have the perfect relationship and life. I was slightly disappointed that the book ended on a kind of cliffhanger because I wanted to know what happened with the murder, but I guess it’s even more of reason to read book three, and I have to say I’m excited to see where the author will take us next.