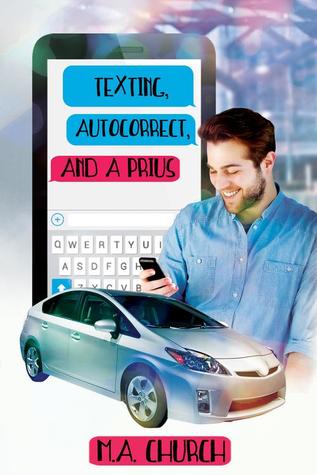 Clay McDonald finds the perfect car on Craigslist and is quick to send the seller a text:

Is your penis still for sale?

Luckily Darrell Anderson, a mechanic and the owner of the Prius, is more amused than offended, and the two men agree to meet. When they do, the attraction is instant, and a date is arranged. But a series of mishaps, misunderstandings, and misplaced assumptions sorely test the new relationship.

In a contemporary romantic comedy about the perils of technology and dating in the modern world, a text that went so wrong might just lead to something so right—but only if Clay can refrain from jumping to conclusions and give love the benefit of the doubt.

So when I first saw this book I thought it showed a lot of potential, a texting fail that leads to romance, I mean who doesn’t love a bit of humour in a story, but what I read wasn’t really what I expected. It was enjoyable enough, but I thought it could have been a whole lot more.

Darrell Anderson’s a 43-year-old mechanic who owns his own business, and he’s been left with a silver/grey Prius after the owner didn’t pay their bill for the work that they’d asked Darrell to complete on it. Darrell’s brother and employee, Bert, suggests to Darrell to sell the car to recoup the money for the repairs and to get it off his hands. So he asks Darrell to let him try to sell it on Craigslist, as it’s usually a quick way of getting a sale, but he’ll put Darrell’s number as the contact because the car will be kept at his house.

Clay McDonald’s in his mid-thirties, and works as a dock supervisor in a refinery in Memphis. Clay has an hour-long commute to work everyday and his gas-guzzler truck is costing him a small fortune to run, so Clay decides that he needs to look for a smaller more fuel-efficient car to use for his work journey. When he meets up with his best friend at their local bar/diner to discuss his options for getting another car, he sees a beautiful black Corvette in the parking lot, with an even more attractive owner behind the wheel. He knows the Corvette is not even nearly what he’s looking for, no matter how good it looks, but he can’t seem to get the guy inside it out of his head. When his friend suggests having a look on Craigslist for cars, Clay isn’t too sure but decides he’ll give it a go because finding something he actually likes within the budget he has is proving difficult.

When Clay sees the advert for the Prius on Craigslist he immediately makes contact with the seller because the car is pretty much perfect for his needs. The only problem is he didn’t actually check what he’d written before pressing send, and instead of asking if the Prius was still available, he inadvertently asked if the penis was still available. When Darrell receives the message, he takes it in good humor and tries to make a joke of it, which Clay is relieved about. They both agree to meet so as Clay can take the car on a test drive. As Clay pulls up to Darrell’s house he can’t believe what he’s seeing, the Corvette from the parking lot he was lusting over is in the drive, and the handsome owner that’s been in his thoughts since that first glance has just walked out of the house to meet him. There’s instant chemistry and attraction between the two men, and they can’t believe how well they get on with each other. Could it really be fate bringing them together like this? It’s not all plain-sailing though because thanks to a little misunderstanding with Bert when he answers Darrell’s door, Clay thinks it’s already doomed before its begun. There’s also the other issue that even though Clay is the smaller, younger man, he likes to be in control, especially during sex, but Darrell has never bottomed and doesn’t know if he can be that person who gives over control to someone else.

This book was very insta-love, and had so many coincidences it felt a little bit too unrealistic, but for a fairly short book, it kept me entertained and I did like the characters a lot. I just wish it had a little more depth to it or it was a bit longer so as it didn’t feel so rushed. Don’t get me wrong the sex scenes were HOT! My favorite was the driveway scene, you’ll definitely need a few minutes after reading that hehehe. All-in-all I liked this book, even though it wasn’t what I first expected, and for a bit of light-hearted reading, it fulfilled its purpose. It made me smile and laugh, and really isn’t that what you want when you finish a book? So yes, it may not be everyone’s cup of tea, but I’d recommend it.