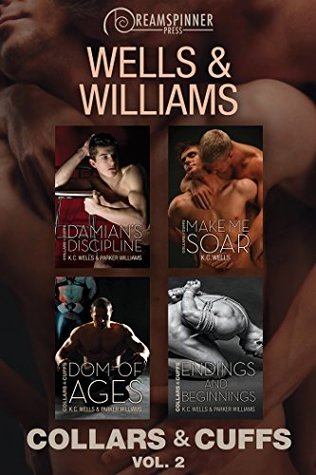 The Collars & Cuffs club has room for all types of men to find healing and love. In Damian’s Discipline, Dom Damian Barnett welcomes damaged Jeff into his home after Leo and Thomas save him from the streets. Jeff may not be a submissive, but Damian may be able to offer him the structure he needs to rebuild his life. In Make Me Soar, self-proclaimed “pain slut” Dorian Forrester is chasing the ultimate high into dangerous places. When he goes missing, Alan Marchant is determined to show Dorian that there are better way to fly.

In Dom of Ages, Eli has found his perfect submissive in Jarod, but their age gap has Jarod waiting for the other shoe to drop. A visit to Collars & Cuffs gives the struggling couple hope that their relationship just might stand a chance. And in Endings and Beginnings, barman JJ Taylor didn’t expect to find himself drawn to wannabe Dom Darren Fielding, but as the members of Collars & Cuffs face an event that will make them stronger or break them, JJ finds his life going in a direction he could have never guessed.

As a huge fan of Collars & Cuffs, I’m really excited about the second volume. The thing I love about these books is that they have the BDSM that I love but also that they have the true love aspect also. These books touch on real life stuff and grab hold of your heart. These authors are not afraid to touch on some of life’s sensitive subjects that affect people’s everyday struggles. I do warn you that these can be very sensitive subjects for people that have went through such things but do know, there is hope for everyone out there. There is hope to get through the struggles as a stronger person and to find your own happiness.

What I love about these characters is the cheekiness of the subs and how they can bring these big, bad Doms to their knees, yet be the perfect subs for the ultimate joy of belonging. There is such love, compassion and raw need between these couples. The connection is amazing and how the Doms can read their subs without a word spoken. There is such commitment and connection that help each of these couples conquer anything life wants to throw at them. And let me tell you, life has some wicked curve balls. We all have fears and handle situations differently and don’t handle everything gracefully but we can all learn from our mistakes and move forward.

Damian’s Discipline is the first book of this bundle. Damian is a Dom that lost his sub 2 years ago to cancer. He’s been living life but not with any real purpose. That is until Leo and Thomas ask him to house a troubled boy named Jeff until they can find him a permanent residency. Jeff is someone that has suffered at the hands of the jailed man named Curtis Rogers. Yes, he’s back as the evil man that is jailed for torturing young men and murdering them. This time it’s Jeff. Jeff was so abused by this waste of a man, that he doesn’t even trust anyone with food and drinks. He won’t let anyone prepare anything of the sort for him. Even though Jeff is not a sub, Damian learns about Domestic Discipline and knows this is the structure that will work for Jeff.

Make Me Soar is the second book of the bundle. If you have read the first of these series, then you will remember Dorian as the pain slut that had a thing for Leo. Well, for six years, Dorian has been looking for subspace but has had no luck. No matter how much pain that’s inflicted on him, he can’t reach it. He believes pain is the only way to reach subspace. He hears about a club in Berlin and goes there to see if the change will help him find what he’s looking for. Alan is the Dom that has been watching Dorain at the club for a while now but doesn’t understand his need for pain. When Dorian disappears, he asks another sub of his whereabouts and discovers where he went. Alan and Leo head to Berlin and what they discover is horrific. This is the start of a wonderful and loving story and how pain can be something as gentle as a simple touch.

Dom of Ages is next. This is such a powerful story and my favorite of the series. These two MC’s don’t even meet at Collars & Cuffs but end up becoming a strong part of the family there. Jarod is the epitome of a sub. He is old school and was with his Dom and love of his life for 24 years before he was taken from him in a heroic act. For the last four years, Jarod has done nothing but mourn the loss of his master and kept their home clean. Jarod’s mother begs him to try to live again but Jarod is scared because he’s almost 50. But he takes her advice and goes to this horrible BDSM club where he’s laughed at and made fun of by both subs and Doms. Eli is a 30-year-old Dom that is sick of the wanna be subs that he keeps seeing in the very same club. Eli has almost given up hope when he sees him on his knees in the perfect sub form. Jarod can’t believe his luck to be able to serve again. These two have some struggles at first, but a suicide attempt brings them to such a wonderful start to a new life. Eli finally takes Leo’s advice and takes Jarod to Collars & Cuffs and they both feel at home immediately and build friendships that they both needed.

Endings and Beginnings is the final book in this bundle. Here we meet Darren that witnesses the perfect intimacy between Thomas and Peter. After Darren’s lover moves on in a different direction, Darren wants to see where his life can go. He finally takes the card Thomas gave him and goes to the club. He loves the whole Dom aspect and wants to learn more. This is also where he meets the barman, JJ. This barman is working at the club under false pretenses but soon discovers he wants the relationship he sees over and over again. These two discover how to be Dom/sub together with the training of Thomas. This is a wonderful wrap up of all the Doms/subs/lovers in this ending of the series. I had so many emotions in this book. I got angry, felt hurt and cried.