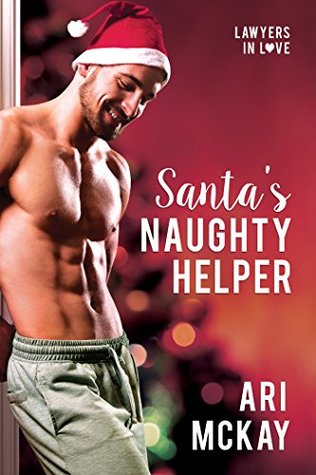 Shy lawyer Kevin Anderson is presented with an unexpected opportunity when he draws hunky litigator Erik Wilson’s name for their office’s secret holiday gift exchange. Kevin has pined for his friend for a long time, but he fears ruining their working relationship if Erik doesn’t return his feelings.
The anonymity of the exchange gives him the chance to let Erik know someone is interested, so Kevin turns the gift into a game: twelve days of presents, each more suggestive, culminating with a Christmas Eve meeting—if Kevin finds the courage to see it through!

Erik is intrigued by his secret Santa, who has given him something to look forward to during the holidays for the first time in years. But as Christmas approaches, he realizes he doesn’t want a mystery man; he wants his best friend, Kevin. When his attempts to instigate something with Kevin fail, Erik accepts the dinner invitation of his secret admirer. Little does he suspect that Santa’s naughty little helper might be just the man to make all his Christmas dreams come true in a holiday friends-to-lovers romance that progresses from sweet to spicy for two sexy lawyers.

Santa’s Naughty Helper’s a cute short story. It’s well written and nicely edited. There isn’t much depth, but that’s okay. When I read a book that is only 52 pages, I’m not really looking for much depth, but more of just a cute story to distract me from life for a little while and this book accomplished that.

Santa’s Naughty Helper’s about two lawyers, Kevin and Eric, which work together at a large law firm. Kevin and Eric are complete opposites. Kevin’s an introvert which makes him a great researcher but not the best litigator. He’s been in court often over the years, but he wasn’t the lead attorney. He also doesn’t care for the spotlight, the television interviews, or the notoriety that comes with the some of the high profile cases. Where Kevin’s shy, Eric’s friendly, and while Kevin disliked having to stand up and speak in court, Eric thrived on it. Eric’s an extrovert which makes him a great litigator, but he has too much energy to be the best researcher. They work well together because their expertise and skills sets mesh well and this makes Eric and Kevin, the firm’s best litigation team. Kevin gets to do the background work and research, and Eric gets to be the lead lawyer and all that that in tales.

However, in addition to being a great team, they are also close friends. They hang out at each other’s places and watch movies and eat pizza and also work out at the gym together. They know each other’s likes and dislikes and Kevin has been in love with Eric for quite some time but he doesn’t want to jeopardize their friendship or their working relationship either, so he hasn’t said anything to Eric.

Each year the law firm does a secret gift exchange as their way of getting the firm’s employees to get to know one another on a personal level. Moreover, this year Kevin draws Eric. He sees this as his opportunity to finally tell Eric how he feels about him without having to do it directly and possibly face rejection. So he comes up with doing a gift every day for 12 days just like the holiday song. Moreover, each day’s gift will be more suggestive, with the big reveal on the 12th day.

I loved seeing how Eric reacted to each day’s gift. You could tell that Kevin really knows Eric well. I loved the end of the book, and I would love to see more of Eric and Kevin and their relationship.

I recommend this book for anybody looking for a cute relaxing read.