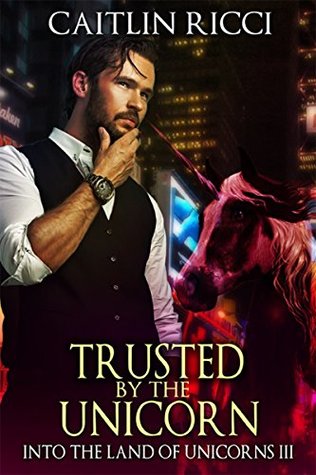 Back on Earth, Sayer is healthy again, but unicorns don’t do well in the city. He’s miserable and Todd wants to help him. He and his brothers have a cabin upstate that might work for them but it needs a lot of repair. Thankfully, it’s just the kind of place for three unicorns to call home.

This was a fascinating read. You have two sets of brothers. One set is human, the other unicorns. The unicorns were slowly dying in their world so came to Earth. Calix and Xavier have already gotten into relationships with the two human brothers Seth and Jacob. The oldest unicorn brother, Sayer, is the last one to come to Earth. Now Todd, the last human brother, and Sayer will have a year to get to know each other as they get the old cabin fixed for all of them to live in.

I found this story to be a sweet slow romance. In fact, I would of liked a little more of Sayer and Todd interactions. The pace was very fitting to the way society was the last time Sayer was on earth. The heat level was very low. The descriptions of the land and cabin after the year of working on them while waiting for the brothers to move was very well done.

Over all, will I found the book to be good, it had the potential to be great. If there had been more detail about the humans’ visits every weekend and more interactions between Sayer and Todd, this book would have closed the series perfectly. As it stands, it just didn’t have enough to carry a successful series closure. I would like to thank the author for the opportunity to read this ARC. My review is an honest opinion of the book.