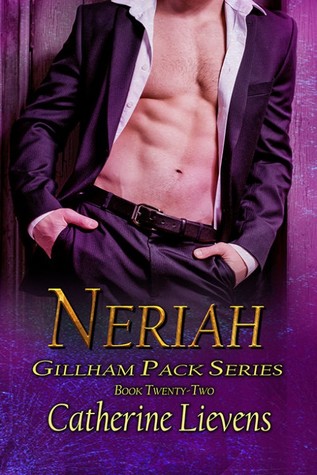 Sometimes you realize what you have only when you’re on the brink of losing it.

Neriah arrived in Gillham after spending two months as his tribe leader’s fake hostage. Now he works part-time in a flower shop, plays big brother to the street kids flocking to Gillham, and thinks of ways to stop his tribe leader from ruining his life. He thinks his life can’t get any more exciting—until he meets his mate.

Connor is human, and the only reason he’s in Gillham is to write about the pack for the Daily Beacon. He’s lucky enough to get an exclusive interview with Alpha Rhett, but things get weird when a small blond man with pointed ears tells him they’re mates right in the middle of the interview.

Connor is wary of the mate bond and insists he doesn’t believe in soul mates. Neriah is focused on changing Connor’s mind at all cost—and that includes by dating him. But Gillham isn’t the sleepy little town it used to be anymore, and the humans set against the pack are starting to create problems again. Connor risks losing Neriah forever when he’s kidnapped, and that makes him realize how much he cares for his mate.

Will that realization come too late?

Neriah by Catherine Lievens is the twenty-second book in the Gillham Pack series. I didn’t like it as much as I liked Geoffrey (the 21st book in the series). Neriah acted too juvenile for my tastes. He had just found his soul mate and needed to woo his mate who’s human, but instead, he’s checking out other pack member’s behinds and doesn’t see anything wrong with it. The story also didn’t flow as well as the previous one, and I didn’t like the storyline as much. I did like getting to see Neriah’s brother Nuallan and his mate Ethan and some of the other pack mates. The book was well written and nicely edited.

Neriah’s a Nix, and he currently lives with the Gillham Pack after being his Tribe leader’s fake captive for two months. He lives in a house with his brother Nuallan and his mate Ethan. He’s an extrovert and very talkative. He’s bold and can be brash at times. He can also be juvenile at times and sometimes doesn’t think about his actions before doing something. He’s loyal to his friends and family, which I liked. I would have liked to have seen him focus more on his human mate Connor and help him overcome his wariness of the mate bond.

Connor’s a human journalist for the Daily Beacon. He’s used to researching and writing articles instead of going to the places and interviewing people in person to write his article. While interviewing the pack about the Wendigo attack in town, he meets Neriah who insists that Connor’s his mate. Connor doesn’t believe in mates though, and he has the worst luck in love, so he has a hard time believing that there’s a perfect someone out there for him. And as Neriah explains more about the benefits of being mates, like an extended longevity, he becomes even more apprehensive. Which I can understand, I’m not sure I would want to outlive all of my friends and family either.

But slowly Connor starts to come around as he talks to his friends and family and spends time with the pack and Neriah. But when Neriah’s kidnapped, Connor admits to himself that he has fallen in love with Neriah and wanted to bond with him. But that will only be able to happen if they can rescue Neriah.

I absolutely loved the end of the book though as the author introduced the characters for the next book. Which made me want to read it since it looks like it is going to be about a human who has two mates.

Yep, I can’t wait to read Rabbit, the next book in the series.