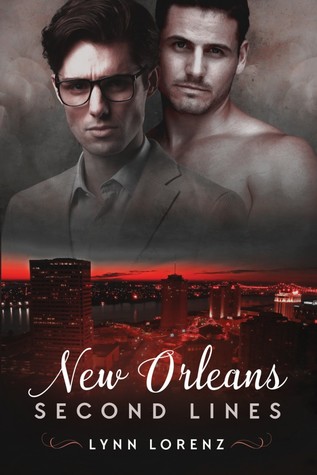 Matt and Lane grew up together, best friends, sharing almost all their secrets. But on the last day of college, those secrets spilled in one night of passion and tore them apart, sending Matt to the West Coast and Lane home to New Orleans.

Now, Hurricane Katrina is set to destroy New Orleans. This might be the worst time to try for a second chance, but nothing can keep Matt from Lane. The man he let get away.

For Lane, no hurricane can pry him from the city, especially without Sebastian. The older man has been a dear friend and his landlord since Lane returned from college. Sebastian refuses to flee, preferring to stay in his Creole cottage in the French Quarter and ride out the storm.

Sebastian’s life becomes intertwined with Lane’s, as Matt finds out when he’s drawn into capturing Sebastian’s memoirs of being gay in New Orleans. The elder gentleman’s stories are full of surprises and lessons for the young men.

The most important ones Sebastian teaches them—and himself—are that second chances don’t come along often, and you’re never too old to fall in love.

**** Before starting my review, I would like to explain something about this book. The first 12 chapters are about Lane and Matt, the next 28 chapters are about Sebastian, his life as a young gay man in the 50’s and his new re-found love at seventy something years (you need to read the book if you want to know his age). Matt and Lane are secondary characters past chapter 12 ****

Lane and Matt have been best friends since childhood. Lane has lovely parents who are there for him, Matt has an abusive alcoholic father who beat him each time he’s drunk. They grew up together and went to college together.
2 days before their graduation, Lane and Matt spend an amazing sexy night together. But when Lane wakes up the next morning, he was alone.
5 years later, Katrina is approaching New Orleans, Lane refuses to leave his landlord Sebastian. The old man refuses to leave his cottage and they decide to barricade themselves and wait until the end of the hurricane. Matt is sent by his Chief editor in NOLA to cover the hurricane, but what Matt wants is to find Lane and reconquered him.

Sebastian is 70-something years-old (like I said, you need to read the book if you want to know his age), he lives alone in his small cottage after the loss of the love of his life 20 years ago. He is very attached to Lane, so when Matt comes for him, Sebastian is there to remind Lane that Matt is his soulmate. Sebastian tries to explain to the boys how it was to be a young gay man in the 50’s, how life can be cruel and how to not waste a second chance when the opportunity shows up, even at 70 something.
It was a sweet emotional read. Lane and Matt are adorable and hot, but, Sebastian, is a queen (like he says himself), I fell in love with him (no, I don’t do geriatric people I swear).

It was absolutely beautiful to follow his life, his lost loves, his pain (I cried so much when he remembered his lover’s death). But what was the most beautiful, it was how he re-found love at his age.
It was beautiful and heartbreaking at the same time. Beautiful to read his reactions, how as an old man, he can be a real teenage girl, how he blushes (so cute), and heartbreaking to read his doubts, that at his age he can’t have love again, can’t have sex. And yes, he had sex, and it was sweet and nice.

I admit, I wasn’t really excited to read a love story (and sex) about two old men who could be my grandpa (annnd now, I imagine my grandpa having sex…my libido is over) but, the author brings it up beautifully, almost poetically.
This book was a beautiful lesson about life, regrets and how to not waste our time on silly things, silly fears. It talks to me personally. And at 70-something years-old, I want to be like Sebastian, a beautiful queen, still hot, with an active sex life (when I stop thinking about my grandpa having sex!).

For me, it’s 4 OptumuMM’s, Sebastian deserve it!