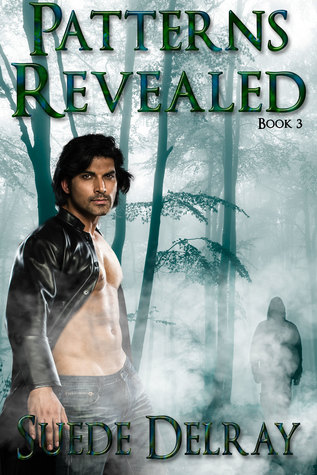 Dominick has recovered from his injuries but is still on suspension from the force. This hasn’t deterred him from wanting to solve the Regis murders. Some information from his sister prompts Dominick and Rob to take a weekend trip to Boston. What they don’t know is that the killer is watching.

Patterns Revealed is a continuation from book two of the series so can’t be read as a stand-alone. It starts off almost exactly where More Patterns finished.

Dominick and Rob are heading to Boston to follow up on information about a murder similar to the one that Dominick was investigating. Dominick believes that there are too many similarities to the other murder for it not to have been the same person. But the problem is that someone already confessed to the older murder, and is currently in a psychiatric hospital after being sentenced and trying to kill himself. Rob and Dominick manage to go to the house the murder was committed in by pretending they’re interested in buying it. Inside the house, they find that it’s been left in the same condition as it was just after the crime tape had been removed. There are still blood stains on the carpets, and the faint outline of the blood writing on the wall can be seen. Rob gets a creepy vibe from the house and doesn’t like being there, especially after finding that someone has been sleeping in the basement and that there’s also a rat problem. When they head outside to meet up with the realtor again, Rob sees a face at the window, they go back inside only to find a message for Dominick written in rat’s blood on the wall. They return to New York where Dominick is placed back in charge of the investigation. Dominick and his partner Betty continue their hunt for the killer who likes nothing more than to taunt them by leaving little clues and messages for Dominick. But they soon discover that the killer has been watching them for quite some time, and he knows more about Dominick, his family and their lives than they could ever have imagined.

The Martindale Institute also has a new intake, a 13-year-old boy named Logan, who was found working as a prostitute and addicted to crack cocaine and heroin. Rob can’t help but form an attachment to the boy because he sees a lot of himself in Logan and what he’s been through. Logan’s longing for a loving home and family and Rob’s protective, caring nature means that Rob will do whatever it takes to try and help Logan.

What can I say, this book was fascinating. I was on the edge of my seat most of the time while reading it, and was so engrossed in the story that I forgot the rest of the world existed for the few hours it took me to finish. This book’s definitely been my favourite by this author, it was the perfect conclusion to the murder investigation, and the unveiling of the identity of the killer was done brilliantly. I’m so glad I stuck with this series and characters.